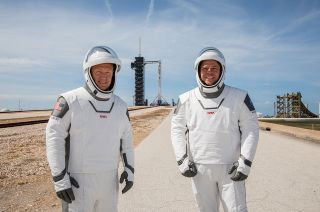 NASA astronauts Doug Hurley (at left) and Bob Behnken (right) participate in a dress rehearsal for their launch at the agency's Kennedy Space Center in Florida on May 23, 2020, ahead of SpaceX's Demo-2 mission to the International Space Station. The astronauts' SpaceX-designed spacesuits omit a mission patch.
(Image: © Kim Shiflett/NASA)

The multimedia event, called "Launch America: Mission to Space," will begin Wednesday (May 27) at 3 p.m. EDT (1900 GMT) on both organizations' websites, just 1.5 hours before the expected launch of veteran astronauts Doug Hurley and Bob Behnken from NASA's Kennedy Space Center in Florida.

Coverage should pick up again on Thursday (May 28) as the astronauts approach the International Space Station; the exact time will be announced later. The broadcast is one of many to offer live views of SpaceX's historic launch (including Space.com's own simulcast of NASA's webcast).

"I hope everyone who possibly can watches it," retired astronaut Nicole Stott told Space.com ahead of the  ABC News/NatGeo "Launch America" broadcast, adding that she plans to watch the launch from near her home in Florida. "I'm going to get out there, but I want anybody who can, from whatever place they are going to be, to do that, too."

In addition, National Geographic contributing writer Nadia Drake is on the scene in Florida, and her reports will be sent to millions of readers in a breaking-news edition of the NatGeo newsletter the evening of launch. Ahead of the launch, the magazine is publishing online stories including a photo timeline of human spaceflight, posting to Instagram, and sending email newsletters to readers. An embedded livestream of the ABC News Live program will be available on the National Geographic website during the launch, as well.

"The live event will offer a comprehensive look at what's on the horizon in human exploration," the companies said in the statement. In particular, the coverage will focus on "SpaceX and Elon Musk's roles in the launch, personal stories of what life is like on the ISS, and profiles of Behnken and Hurley," the companies added. Also featured will be profiles of NASA astronauts Karen Nyberg (Hurley's wife) and K. Megan McArthur (Behnken's wife).

If the launch is delayed before the production broadcasts, National Geographic and ABC will move their live special to the new launch date. So far, the backup date is May 30 at 2 p.m. EDT (1800 GMT), the companies said.