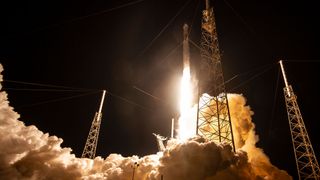 CAPE CANAVERAL, Fla — The next SpaceX launch is just days away as the California-based rocket builder is targeting Wednesday, July 24, for the launch of its next robotic resupply mission to the International Space Station (ISS).

This flight, called CRS-18, marks the eighteenth mission for SpaceX under its commercial cargo resupply services contract with NASA. In preparation for Wednesday's launch, the company test-fired the vehicle that will ferry a Dragon cargo capsule to orbit. The launch will occur on the 50th splashdown anniversary of NASA's Apollo 11 moon mission.

Friday evening, a scorched and sooty Falcon 9 first stage booster roared to life, as smoke billowed from its engines during a preflight test. The brief ignition, known as a static fire test, is a routine part launch preparations, ensuring that all systems are working properly and that the rocket is ready to fly.

The pre-flight test — originally expected to take place on July 16 — appeared to go off without a hitch, following a 3-day schedule delay. (No reason was given for the delay.) Not long after the rocket's engines shut down, SpaceX tweeted that the launch would occur Wednesday.

SpaceX and NASA are finalizing the mission timeline. timing. Liftoff is scheduled for 6:24 p.m. EDT (2224 GMT) Wednesday, and if all goes as planned, the robotic capsule will take two days to reach the International Space Station, arriving on Friday, July 26.

In addition to various crew supplies and hardware, NASA officials have said that Dragon will also be carrying 2,500 lbs. (1,135 kilograms) of science gear, which will enable many experiments across Expeditions 59 and 60.

The upcoming launch will star one of SpaceX's flight-proven boosters. Designated with the internal company identifier B1056.2, the used rocket already has one launch and landing under its belt. It helped hoist another Dragon cargo capsule, as part of the company’s 17th resupply mission in May of this year.

After a dazzling nighttime launch, the rocket's first stage returned to Earth, landing on one of SpaceX's two drone ships, named "Of Course I Still Love You," stationed just offshore. This time around, the booster is expected to land at the company’s designated landing pad, LZ-1, at Cape Canaveral's Air Force Station in Florida.

The Dragon spacecraft on this Falcon 9 has also flown in space before. It's making its third trip to orbit on CRS-18 after delivering NASA cargo to the space station in April 2015 and December 2017, according to SpaceX.