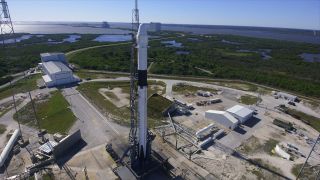 SpaceX has pushed back the launch of a Dragon cargo mission for NASA this week by 24 hours, with liftoff now targeted for Wednesday (May 1).

The uncrewed Dragon resupply ship will now launch to the International Space Station Wednesday at 3:59 a.m. EDT (0759 GMT) from Space Launch Complex 40 at Cape Canaveral Air Force Station in Florida, according to SpaceX and NASA. SpaceX test-fired the Falcon 9 rocket that will launch the mission on Saturday (April 27).

"Static fire test of Falcon 9 complete — targeting May 1 launch from Pad 40 in Florida for Dragon's seventeenth mission to the @Space_Station," SpaceX representatives said in a Twitter update on the mission.

The one-day launch slip follows a four-day delay of the mission (it was initially scheduled to launch April 26) by NASA and SpaceX "due to station and orbital mechanics constraints," NASA officials said at the time.

SpaceX representatives said the company would use those four extra days for launch vehicle checks and the Falcon 9 static fire test, which fired the booster's first stage engines briefly. Static fire tests are a standard SpaceX activity before every launch.

The upcoming Dragon cargo mission will be SpaceX's 17th delivery flight for NASA. The spacecraft will deliver more than 5,500 lbs. (2,495 kilograms) of fresh supplies, experiment hardware and other gear to the Expedition 59 astronauts currently on the space station.

But before SpaceX can proceed with the in-flight abort test, the company must complete its investigation into an April 20 anomaly during a Crew Dragon abort system test. That anomaly occurred as SpaceX was testing the Crew Dragon's eight SuperDraco abort engines on a test stand at Landing Zone 1, one of the company's two rocket landing pads at Cape Canaveral Air Force Station.

Meanwhile, SpaceX is also gearing up for another big mission: the next launch of its massive Falcon Heavy megarocket.

Last week, SpaceX successfully test fired the center core stage of the Falcon Heavy that will be used to launch the Space Test Program-2 mission for the U.S. Air Force. That mission will include a host of different payloads for the U.S. Air Force, NASA, Planetary Society and other customers.