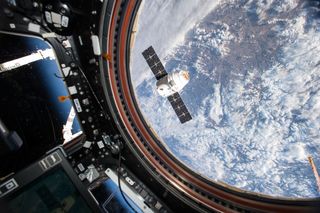 A SpaceX Dragon spacecraft hangs outside the International Space Station's Cupola module. The craft was there during the company's eighth resupply mission to the station, photographed by NASA astronaut Tim Kopra in April.
(Image: © NASA)

As NASA and SpaceX look into cause of an accident that marred an uncrewed test of SpaceX's Crew Dragon capsule Saturday (April 20), agency officials say the company's upcoming space station launch — which uses a different type of Dragon spacecraft — is still on target.

"The NASA and SpaceX teams are still assessing the anomaly that occurred," Finch said, "but I can tell you we are still tracking, as of today, for Tuesday, April 30, and that launch will be at 4:22 a.m. Eastern time," Finch said, directing reporters to an official statement from NASA Administrator Jim Bridenstine.

The cargo launch, from Florida's Cape Canaveral Air Force Station, had already been pushed back from April 26 due to what NASA officials called station and orbital mechanics constraints.

The April 20 Crew Dragon accident occurred during a test firing of the capsule's SuperDraco abort engines, causing large plumes of smoke visible from nearby. There were no injuries, 45th Space Wing officials told Florida Today.

The Crew Dragon's eight SuperDraco engines are designed to pull the spacecraft free of its Falcon 9 rocket during a launch emergency and carry an astronaut crew to safety. SpaceX's  cargo version of Dragon spacecraft is not built to carry astronauts, and does not have the SuperDraco abort engines.