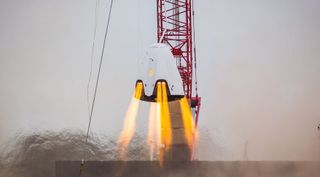 A SpaceX Crew Dragon spacecraft testing its SuperDraco thrusters. A NASA safety panel said it will take some time to get to the root cause of an anomaly during an April 20 test of the thrusters.
(Image: © SpaceX)

WASHINGTON — Members of an independent safety panel said April 25 it will take time to determine what happened during a SpaceX Crew Dragon testing incident several days ago, and that its impact to the overall commercial crew program remains uncertain.

At a meeting of the Aerospace Safety Advisory Panel (ASAP) at NASA's Marshall Space Flight Center, members offered few new details about the anomaly during an April 20 test of the SuperDraco thrusters on the Crew Dragon spacecraft at a test site at Cape Canaveral Air Force Station. That incident enveloped the vehicle in a fireball and created a smoke plume visible far from the site.

Patricia Sanders, chair of the panel, confirmed that the anomaly took place during a static-fire test of the SuperDraco thrusters used in the spacecraft's launch abort system. Those thrusters were being tested prior to an in-flight abort test that had been planned for this summer.

Related: SpaceX Crew Dragon Accident a Bump in the Road for Commercial Crew

The April 20 test, she said, was intended to demonstrate the integrated systems performance of the SuperDraco system, after testing of 12 smaller Draco thrusters were successfully completed. "Firing of eight SuperDracos resulted in an anomaly," she said.

Both NASA and SpaceX started carrying out mishap plans after the incident, and she noted the anomaly did not cause any injuries. SpaceX is leading the investigation with what she termed as "active NASA participation." The initial work is focused on collecting all the evidence from the test site and creating a timeline of the incident.

"The investigation will take time before the root cause analysis is completed, and will determine the impact to Demo-2 and the in-flight abort test," she said. Demo-2 is a crewed test flight, with two NASA astronauts on board, that had been scheduled for no sooner than July.

Panel members offered few other details about the incident and its effect on the overall commercial crew program. "We know that there's a lot of interest regarding the recent SpaceX mishap. We are patient, and allow the teams to investigate," said Sandra Magnus, an ASAP member.

The test took place about six weeks after the Demo-1 capsule returned from a successful uncrewed test flight to the International Space Station. While that test flight went well, Magnus said it was clear that even before the flight that SpaceX had a lot of work to do before it could move ahead with Demo-2, which she linked to an iterative or "spiral" development approach the company had adopted.

"Prior to the Demo-1 launch, because of this spiral development approach undertaken by the company, NASA and SpaceX identified configuration changes and subsequent qualification work that would be required to be completed before Demo-2 was possible," she said.

"Notwithstanding the recent incident, there is a large body of work yet to be completed between Demo-1 and a crewed flight," she continued. "It's still too early to speculate on how that body of work will alter based on recent events."

Boeing has taken a different, more traditional development approach that works to get the design of its CST-100 Starliner commercial crew vehicle more mature prior to any test flights. An uncrewed test flight of the spacecraft is now scheduled for early August and a crewed test flight before the end of the year.

The company, she said, has made progress on a number of technical issues, but there is still work to complete. "Both NASA and the Boeing team are facing the submission and analysis of the required data from the final certification and verification processes," she said.

Magnus warned about schedule pressure on the program, and said that NASA had acted appropriately by securing alternative plans to maintain access to the ISS through late 2020. The panel, she said, supported the position of NASA's commercial crew program "that crewed missions will not happen until the program has received the data that they require" to ensure the vehicles operate with adequate safety margins. "We will continue to emphasize that as the work goes forward on both programs."