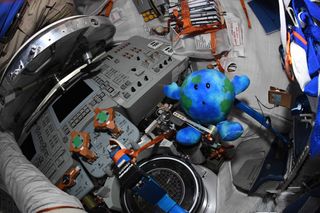 The Celestial Buddies Earth plushy that flew to the space station on Crew Dragon will stay in space for a few more months.
(Image: © David Saint-Jacques/CSA/NASA/Twitter)

When Ripley the dummy astronaut returned to Earth today (March 8) on SpaceX's Crew Dragon spacecraft, it left its cute friend "little Earth" behind on the International Space Station.

SpaceX loaded the adorable, anthropomorphic Earth plushy — which is made by a company called Celestial Buddies — into the Crew Dragon capsule to serve as a "super high tech zero-g indicator" during the launch of the capsule's first uncrewed demonstration mission.

After a week of having fun with the Expedition 58 crew, the Earth plushy did not board the Crew Dragon for the spacecraft's return to Earth this morning. Instead, the so-called "Little Earthy" (or is it Little Earthie? SpaceX did not clarify) will be sticking around until the next Crew Dragon mission returns from the space station this summer, SpaceX engineer Kate Tice said during a live webcast of the splashdown today.

"He's not coming back until you bring him back for us," Tice told NASA astronaut Bob Behnken during the webcast. Behnken will be one of the two astronauts on board the vessel during Crew Dragon Demo-2, the first crewed test flight of the Crew Dragon, which is scheduled to launch in July. He and NASA astronaut Doug Hurley will spend 14 days at the station.

After the Expedition 58 crew posted several photos of "Little Earthy" taking tours of the International Space Station and "learning" about spaceflight on social media, Tice asked Behnken what he might teach his cute little crewmember once he arrives at the station. "I think our plan is to have him teach us — he's gonna welcome us aboard when we get there," Behnken said.

The Celestial Buddy wasn't the only piece of cargo that got left behind when the Crew Dragon departed the space station today. An American flag that came up with the Crew Dragon will also stay on the station until the next Crew Dragon mission returns, Kathryn Lueders, the program manager for NASA's Commercial Crew program, told Space.com. It also delivered about 400 lbs. (181 kilograms) of supplies and gear for the station crew.