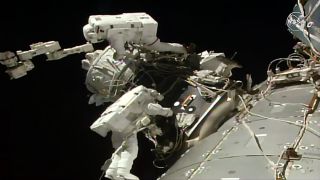 Two NASA astronauts stepped outside the International Space Station Wednesday (Aug. 21) to install a new docking port for incoming commercial crew spacecraft during the fifth spacewalk from the station this year.

Nick Hague and Andrew Morgan began their 6 hour and 32 minute spacewalk at 8:27 a.m. EDT (12:27 GMT), exiting from the U.S.-built Quest airlock after switching their spacesuits over to battery power.

The pair installed the International Docking Adapter-3 (IDA-3) to the space-facing side of the station's Harmony connecting module. IDA-3 will serve as a second docking port at the space station for incoming commercial spacecraft built by Boeing and SpaceX. NASA has tapped Boeing's Starliner capsule and SpaceX's Crew Dragon spacecraft to ferry astronauts to and from the space station in the future.

Gallery: The Most Memorable Spacewalks in History

The spacewalk marked Morgan's first time venturing outside the space station, while Hague has already performed two spacewalks earlier this year to assist in replacing some of the station's solar array batteries. During Wednesday's excursion, Hague was the first one out, followed by Morgan a few minutes later as the station soared over the Atlantic Ocean.

Hague's mother was watching the action from Earth at NASA's Mission Control center at the Johnson Space Center in Houston. She apparently cooked up some special treats for the flight controllers on the ground who assisted the astronauts on their spacewalk.

"I heard she was busy in the kitchen yesterday," Hague radioed Mission Control while routing cables outside the station. "I'm glad you guys enjoyed, and I'm jealous." NASA did not disclose in  spacewalk commentary what dishes Hague's mother prepared.

Hague and Morgan expected to have some difficulty in wrangling the docking adapters cables, which have been baking in the sun on the station's exterior since their delivery five years ago. But those fears, it seemed, were unfounded. The astronauts installed the cables with ease, even finishing ahead of schedule.

The only trouble the spacewalkers experienced occurred as they stowed a bulky thermal cover for their tools. As spacecraft communicator Mike Barratt, also an astronaut, in Mission Control put it: "It's like beating a big hostile marshmallow."

After installing the docking port, Hague and Morgan went on to install two vital reflectors on the IDA-3,  which will serve as a docking aid for visiting spacecraft, providing visual cues for those incoming vehicles.

Hague and Morgan also got an extra hand from Canada's Dextre, a two-armed robot that was launched in 2008.

The crew is also tending to scientific research on board such as rodent experiments and stem cell differentiation. NASA's plan to use  commercial spacecraft such as SpaceX's Crew Dragon and Boeing's Starliner will bolster scientific research and technology development to advance the agency's future missions to the moon and Mars, NASA officials said in a in a statement.

Wednesday's spacewalk brings Hague's total time outside the space station to 19 hours and 59 minutes across three spacewalks. Morgan ended the day with 6 hours and 32 minutes of spacewalking time as it was his career first.

"Welcome to the club, you did a brilliant job," Barratt congratulated Morgan as he stepped back into the station.

"It's a special thing we get to do, and it's an honor to be part of such a stellar team," Morgan said.