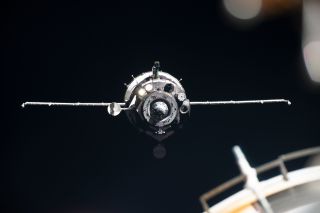 Three Expedition 61 crewmembers will leave the International Space Station and return to Earth Thursday (Feb. 6), and you can watch their journey home live online.

Onboard the departing Soyuz MS-13 spacecraft will be NASA's record-breaking astronaut Christina Koch, who will have spent 328 days aboard the orbiting laboratory — the longest single spaceflight by a woman. European Space Agency astronaut and Expedition 61 Cmdr. Luca Parmitano and Russian cosmonaut Alexander Skvortsov, who launched together in July 2019, will be returning from a 201-day mission to the space station.

The Soyuz spacecraft will undock from the station Thursday at 12:50 a.m. EST (0550 GMT) and will touch down southeast of Dzhezkazgan, Kazakhstan, at 4:12 a.m. EST (0912 GMT; 3:12 p.m. local time in Kazakhstan). NASA will begin live coverage of the landing at 3 a.m. EST (0800 GMT), about 18 minutes before the Soyuz performs a deorbit burn to begin its descent into Earth's atmosphere. You can watch the landing live here on Space.com, courtesy of NASA TV.

Related: Expedition 61: The International Space Station mission in photos
More: The science of Christina Koch's near-year in space in photos

Tonight (Feb. 5) at 9 p.m. EST (0200 GMT on Feb. 6), NASA will stream a live webcast from inside the station as the three space travelers bid farewell to their fellow Expedition 61 crewmembers and board the Soyuz spacecraft. NASA astronauts Jessica Meir and Andrew Morgan and Russian cosmonaut Oleg Skripochka, the space station's new commander, will remain aboard the station.

The undocking of the Soyuz MS-13 spacecraft will mark the official beginning of Expedition 62. However, Parmitano already formally handed over command of the International Space Station to Skripochka in a traditional change-of-command ceremony early Wednesday morning (Feb. 5).

Though the International Space Station typically has six crewmembers onboard, it will be operating at half staff until April 9, when the Soyuz MS-16 spacecraft is scheduled to launch with three new Expedition 62 crewmembers: NASA astronaut Chris Cassidy and Russian cosmonauts Nikolai Tikhonov and Andrei Babkin.