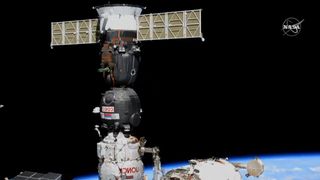 A Russian Soyuz spacecraft took a short spin around the International Space Station Sunday (Aug. 25) to switch docking ports, clearing the way for another spaceship's arrival this week.

In what NASA billed as a "Sunday drive" in space, Roscosmos cosmonaut Alexander Skortsov manually flew the Soyuz MS-13 spacecraft to a new parking spot on the station's top-mounted Poisk module. The move clears the craft's former docking port (at the aft end of the station's Zvezda module) for an unpiloted Soyuz that had to abort its own rendezvous attempt on Saturday.

"Docking right on time," NASA spokesperson Rob Navias said during live commentary as Skvortsov deftly guided Soyuz MS-13 to its Poisk docking port at 11:59 p.m. EDT (0359 Aug. 26 GMT). The station was sailing 260 miles (418 kilometers) above and to the east of Beijing during the rendezvous.

Skvortsov was joined on the 24-minute flight by crewmates Andrew Morgan of NASA and Luca Parmitano of the European Space Agency. The trio arrived together on Soyuz MS-13 on July 20 and will use the spacecraft to return to Earth later this year.

But Sunday's Soyuz flight was not just a short joyride in space. It was critical to clear the Zvezda docking port for the arrival of the new Soyuz MS-14 spacecraft on Monday (Aug. 26).

Roscosmos, Russia's space agency, launched the uncrewed Soyuz MS-14 on Aug. 22 during a test flight of an upgraded Soyuz 2.1a rocket. The Soyuz was scheduled to dock itself at the station's Poisk module early Saturday, but aborted when its automated Kurs navigation system could not lock on to the docking port.

The spacecraft has been trailing a safe distance behind the space station ever since, awaiting its next docking attempt.

Russian flight controllers suspect that a bad Kurs signal amplifier in the Poisk module, not on the Soyuz, led to the docking abort. Since the unpiloted Soyuz did not have a human crew, no one was onboard to take manual control of the docking like Skvortsov did Sunday.

As a workaround, Russian flight controllers had Skvortsov and his crewmates move the older Soyuz MS-13 to the Poisk module manually to allow Soyuz MS-14 to make an automated docking attempt at the Zvezda module on Monday.

While Soyuz MS-14 is unpiloted, it is carrying some much-anticipated cargo to the International Space Station.

The spacecraft is packed with 1,450 lbs. (658 kilograms) of food and other supplies for the space station's six-person Expedition 60 crew. The spacecraft is also carrying a humanoid robot, called Skybot F-850, to the station.

Skybot is an instrumented robot designed to measure the effects of launching on the Soyuz 2.1a rocket to see what a human crew would experience. The robot will also be used during a series of technology tests on the space station before returning to Earth on Soyuz MS-14 in early September.

The last time the space station crew had to move a Soyuz between docking ports was in August 2015, when cosmonauts Gennady Padalka, Mikhail Kornienko and NASA astronaut Scott Kelly flew their Soyuz from the Poisk module to Zvezda, NASA officials said.