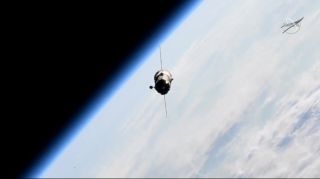 Russia's space agency Roscosmos has a new plan to dock an unpiloted Soyuz capsule at the International Space Station after the first attempt failed on Saturday (Aug. 24) and it's going to require a spaceship shuffle.

But there's just one hitch: Another spacecraft is already parked at the Zvezda port.

That other spacecraft is Soyuz MS-13, which arrived at the space station July 20 with Russian cosmonaut Alexander Skvortsov, NASA astronaut Drew Morgan and European Space Agency astronaut Luca Parmitano. In order for Soyuz MS-14 to park at the Zvezda port, Soyuz MS-13 is going to have to move.

And that's exactly what the Skvortsov and his crewmates will do.

On Sunday night (Aug. 25), Svortsov, Morgan and Parmitano will don their Sokol pressure suits, climb inside Soyuz MS-13 and take it on a short 25-minute flight to another station docking port. If all goes well, Svortskov will park the craft at the space-facing Poisk module on the station's Russian segment at 11:59 p.m. EDT (0359 Aug. 26 GMT).

It was that same Poisk module that the uncrewed Soyuz MS-14 tried to park itself at on Saturday, coming within 328 feet (100 meters) of the station before failing to lock on to the module during the final approach. Ultimately, station commander Alexey Ovchinin of Roscosmos commanded the spacecraft to abort the docking attempt and back away to a safe distance.

"The unpiloted Soyuz is currently orbiting a safe distance from the ISS with all of its systems functioning normally," NASA officials said in a statement Saturday. "The six crewmembers on board the station were never in any danger during the initial rendezvous attempt."

Roscosmos officials believe the Soyuz MS-14 docking failed because of a bad signal amplifier on the station that is part of an automated rendezvous system, called Kurs, which is used for navigation by visiting Russian vehicles.

Cosmonauts will replace the suspect signal amplifier over the weekend. And even if something does go wrong with the Soyuz MS-13 docking at the Poisk module, Skvortsov can always take manual control and fly it in on his own.

That wasn't possible for Soyuz MS-14 because the unpiloted vehicle does not have a human crew. There was no commander ready to take manual control during Saturday's failed docking. And while Russia's robotic Progress cargo ships can be remotely piloted by cosmonauts on the space station with a system called TORU, the Soyuz vehicle does not have such a system since they typically always have human crews aboard.

Soyuz MS-14 is the first Soyuz without a crew to ever to visit the International Space Station. Russia launched the spacecraft on a Soyuz 2.1a rocket, a variant of the Soyuz booster that is typically used to fly uncrewed Progress spacecraft. (Soyuz crew capsules have to date launched on older Soyuz FG boosters.)

This Soyuz test flight is primarily aimed at testing the compatibility of the crew capsule with the revamped Soyuz 2.1a rocket, NASA officials have said. But while this is a test flight, that doesn't mean Soyuz MS-14 will arrive at the  station empty handed.

Packed aboard the Soyuz are 1,450 lbs. (658 kilograms) of food and other supplies for the six members of the station's current Expedition 60 crew. There is even a robotic passenger aboard: the humanoid Russian robot Skybot F-850.

Roscosmos equipped the robot with sensors to measure how a Soyuz launch on a 2.1a rocket might affect human crewmembers during flight. Cosmonauts on the station will also use the Skybot F-850 for a series of technology experiments in orbit before packing the robot back into the Soyuz for the return trip home.

Correction: An earlier version of this story stated that Russian cosmonaut Alexander Skvortsov will dock the Soyuz MS-13 spacecraft at the space station's Poisk module Sunday at 11:34 p.m. EDT. The docking will take place at 11:59 p.m. EDT (0359 GMT).