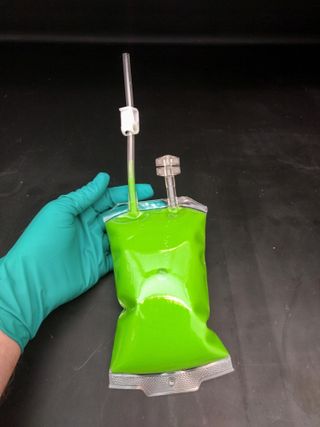 The International Space Station is about to get "slimed."

Nickelodeon's iconic green slime, best known for being poured onto the heads of game show contestants on the television series "Slime Time Live" in the early 2000s, will launch into space today (July 24) on a SpaceX Dragon cargo spacecraft.

The television network is not planning to revive the old series in space, though. Rather than dumping buckets full of slime onto the astronauts — and creating a huge mess that could be extremely difficult to clean up in microgravity — Nickelodeon is sending its slime into space for science.

Related:  Fun in Zero-G: Weightless Photos from Earth and Space

The science investigation, titled "Non-Newtonian Fluids in Microgravity," will examine the physical properties of slime in microgravity through a series of fun experiments, and astronauts will record videos of the "zero-g" slime to share with the world. (The term "zero-g" is actually a bit of a misnomer; the International Space Station is still subject to Earth's gravitational pull, but the astronauts experience a constant state of freefall as they speed around the Earth.)

Surface tension helps to hold water molecules together as they drift around in microgravity. The slime has a slightly different consistency than water, though, so we'll have to wait and see if it holds up any better (or worse) than water during that ping-pong match.

Slime in space? Yes! Take a look behind the scenes as researchers prepare to send Nickelodeon's iconic slime to the ISS National Lab onboard the SpaceX #Dragon! Stay tuned to learn how non-newtonian fluids behave in microgravity. Who is going to get slimed?#slimeinspace pic.twitter.com/daOWyQq5xJJuly 19, 2019

The astronauts will also fill balloons with slime and toss them around the space station, blow slime bubbles and even spray slime at each other, Nickelodeon officials said in a statement. "The astronauts on the ISS will try to keep the slime from turning their orbital home green," the statement said.

Exactly who will be the lucky astronaut to get "slimed" in space has yet to be announced. There are currently six people at the orbiting lab: NASA astronauts Christina Koch, Nick Hague and Andrew Morgan, Russian cosmonauts Alexey Ovchinin and Alexander Skvortsov, and Italian astronaut Luca Parmitano of the European Space Agency.

Six small pouches of the slime are currently packed inside the Dragon cargo spacecraft, which is scheduled to launch on a SpaceX Falcon 9 rocket from Cape Canaveral Air Force Station in Florida this evening at 6:24 p.m. EDT (2224 GMT). It will arrive at the space station early Friday morning (July 26). You can watch the launch live here at Space.com.