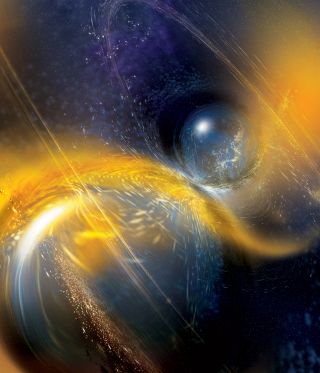 HONOLULU — For the second time ever, the Laser Interferometer Gravitational-Wave Observatory (LIGO) has spotted two ultradense stellar remnants known as neutron stars violently crashing together. The gravitational wave event seems to have been generated by particularly massive entities that challenge astronomers' models of neutron stars.

LIGO made history two and a half years ago, when the observatory detected its first pair of neutron stars — city-size objects left behind when a giant star dies — spiraling around one another and then merging. When extremely heavy objects spiral and smash in this way, they create ripples in the fabric of space-time, and LIGO was specifically built to pick these up.

The new event was observed on April 25, 2019, during LIGO's third observing run, which is ongoing. The LIGO team determined that the total mass of the neutron star pair was 3.4 times that of Earth's sun.

Telescopes have never seen a neutron star pair with a combined mass greater than 2.9 times that of the sun.

"This is clearly heavier than any other pair of neutron stars ever observed," Katerina Chatziioannou, an astronomer at the Flatiron Institute in New York City, said during a press conference Monday (Jan. 6) here at the 235th meeting of the American Astronomical Society in Honolulu.

Researchers can't rule out that the merging entities were actually lightweight black holes or a black hole paired with a neutron star, she added. But black holes of such small stature have never been observed before, either.

Why previous telescopes have failed to detect neutron star pairs this massive remains a mystery, Chatziioannou said. But now that astronomers know that such beasts exist, it will be up to theorists to explain why these objects seem to show up only in gravitational wave detectors, she said. A paper with her team's findings is set to appear in The Astrophysical Journal Letters.

Whenever LIGO senses a potential detection, the observatory sends out an alert to the wider astronomical community, and those researchers immediately train available telescopes on the spot in the sky the facilities identify in the hopes of capturing an electromagnetic flash. After LIGO's first identification of a neutron star merger, a burst of gamma-ray light told scientists that the merger occurred in an old galaxy around 130 million light-years from Earth. This opened up an era of multimessenger astronomy, in which researchers have access to many sources of information about celestial happenings.

But this newly detected event appears to have occurred without an accompanying visible explosion. So far, no other teams have found a flash of light that burst out at the same time as the neutron star merger.

One reason for this is because, out of the world's three operational gravitational wave detectors, only one — the LIGO facility in Livingston, Louisiana — was able to spot the event. LIGO's Hanford, Washington, observatory was temporarily offline at the time, while the European Virgo detector, located near Pisa, Italy, was not sensitive enough to catch the faint gravitational waves, researchers said.

The LIGO-Virgo network normally uses the three detectors as a check on one another to make sure an event is real and to triangulate and pinpoint the event on the sky. So, with only one facility, the best that scientists could determine was that the merger happened more than 500 million light-years away from Earth in a region covering roughly a fifth of the sky.

Nevertheless, the three facilities have been working for long enough now that researchers can accurately distinguish between a fake signal and a real one, even with only one detector. The team understands its sources of noise well enough that it is "confident that this is a real signal of astrophysical origin," Chatziioannou said.

When the neutron stars merged, they collapsed into a black hole, and so Chatziioannou suggested that the giant black hole was created so quickly that it sucked up any outgoing flashes of light, potentially explaining the lack of a visible component. Another possibility is that any jet of energy was simply oriented away from Earth when it shot out from the system, she said.

Astronomers will continue to study the event, as well as subsequent gravitational wave occurrences. In a few weeks, a new detector is expected to come online in Japan, helping scientists detect and pinpoint even more gravitational waves.