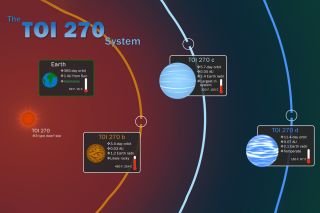 NASA's Transiting Exoplanet Survey Satellite (TESS) has discovered three new worlds that are among the smallest, nearest exoplanets known to date. The planets orbit a star 73 light-years away and include a small, rocky super-Earth and two sub-Neptunes — planets about half the size of our own icy giant.
(Image: © Scott Wiessinger/NASA's Goddard Space Flight Center)

All three worlds are relatively small. One is a rocky "super-Earth" not much bigger than our own planet, and the other two are "sub-Neptunes" about half the size of our solar system's other blue planet, researchers said.

The sub-Neptunes are particularly interesting, study team members said, because they may represent a missing link between rocky worlds such as Earth and ice giants like Neptune. Studying them could therefore help researchers understand if ice giants and terrestrial planets follow the same basic evolutionary path, or if they diverge in some significant way.

In addition, TOI-270 is unusually inactive for a red dwarf; these stars tend to unleash powerful flares relatively frequently, especially in their youth (which suggests that TOI-270 is on the older side). The star's consistent brightness should make it easier to figure out the mass, atmospheric composition and other key characteristics of the planets in the system, study team members said.

"There are a lot of little pieces of the puzzle that we can solve with this system," study lead author Maximilian Günther, a postdoctoral researcher at the Massachusetts Institute of Technology's Kavli Institute for Astrophysics and Space Research, said in a statement. "You can really do all the things you want to do in exoplanet science with this system."

Günther and his colleagues analyzed data gathered by TESS, which launched to Earth orbit in April 2018 and began gathering science data three months later. The spacecraft stares at shifting patches of sky, scrutinizing thousands of stars at a time for telltale brightness dips that may indicate planetary "transits" — the passages of orbiting worlds across their parent stars' faces.

NASA's recently deceased Kepler space telescope also used the transit method, and to great effect: About 70% of the 4,000 exoplanets discovered to date were spotted by Kepler.

The study team noticed several possible transit signals in the "light curve" of TOI-270 (which was so named because it was the 270th TESS object of interest to be identified). The researchers eventually found evidence of three planets, which orbit the star every 3.4, 5.7 and 11.4 Earth days, respectively.

The innermost planet, TOI-270b, is the super-Earth. The outer two, TOI-270c and d, are the sub-Neptunes. All of them are likely too close to the star, and therefore too warm, to host Earth-like life on their surfaces, the researchers said. (This conclusion assumes that TOI-270d has a thick, heat-trapping atmosphere.)

The three planets appear to be in "resonance" with each other, meaning the ratios of their orbital periods are close to whole numbers.

"For TOI-270, these planets line up like pearls on a string," Günther said. "That's a very interesting thing, because it lets us study their dynamical behavior. And you can almost expect, if there are more planets, the next one would be somewhere further out, at another integer ratio."

"TOI-270 is a true Disneyland for exoplanet science, and one of the prime systems TESS was set out to discover," Günther said. "It is an exceptional laboratory for not one, but many reasons — it really ticks all the boxes."

The new study was published online today (July 29) in the journal Nature Astronomy.