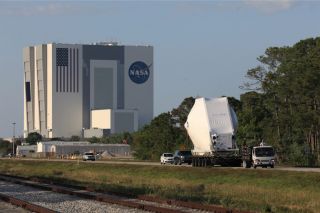 The Orion spacecraft, secured atop a transporter in its shipping container, is carried to the Neil Armstrong Operations and Checkout Building at NASA’s Kennedy Space Center in Florida on March 25, 2020. The spacecraft was transported to Kennedy in NASA’s Super Guppy aircraft from the agency’s Plum Brook Station in Ohio.
(Image: © NASA/Kim Shiflett)

A NASA Orion crew capsule has made it to its Florida launch site ahead of a landmark 2021 mission around the moon.

The capsule had been in Ohio for the past four months, undergoing testing in the world's biggest space-simulation vacuum chamber at NASA's Plum Brook Station. During these tests, engineers subjected Orion to extreme temperatures that ranged from minus 250 degrees to plus 200 degrees Fahrenheit (minus 160 to 90 degrees Celsius) and made sure the capsule's various systems worked properly in the types of electromagnetic environments it will experience off Earth.

The test campaign "went exceptionally well, especially considering we were doing all of this for the first time," Nicole Smith, testing project manager at NASA’s Glenn Research Center in Ohio, said in a statement. (Plum Brook Station is a test facility operated by NASA Glenn.)

"We found a lot of efficiencies throughout the thermal vacuum phase and overcame a few facility equipment challenges early during electromagnetic interference testing, but our combined NASA, Lockheed Martin, ESA (European Space Agency) and Airbus team was able to complete the testing ahead of schedule," Smith added.

At KSC, Orion will endure a final round of processing and testing. It will then be stacked atop NASA's Space Launch System (SLS) megarocket for Artemis 1, an uncrewed mission around the moon that's scheduled to lift off in mid-2021.

Artemis 1 will be the first flight for SLS and the second for Orion, which aced an uncrewed test flight to Earth orbit in December 2014 that launched atop a United Launch Alliance Delta IV Heavy rocket.

If all goes according to plan, Orion and SLS will fly again in 2022, on the Artemis 2 mission. Artemis 2, another round-the-moon flight, will be the first crewed mission for Artemis, NASA's new lunar exploration program. Artemis 3 will land two astronauts near the moon's south pole in 2024. (This aggressive timeline, like many other projects around the world, might end up being affected by the coronavirus pandemic. For example, NASA has had to halt some key SLS production and testing work because of the outbreak.)

The moon is not the be-all, end-all for Artemis. NASA views the program as a steppingstone to Mars, helping pave the way for crewed Red Planet missions in the 2030s.

"With Orion back at Kennedy, we're ready," Scott Wilson, NASA Orion production operations manager, said in the same statement. "Ready to finalize the vehicle and send it to be integrated for its voyage to deep space, tackling the next era of human space exploration."