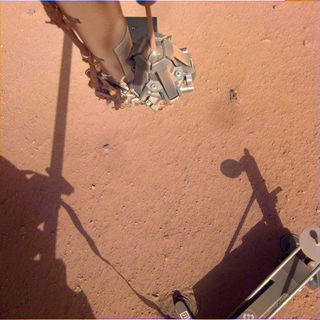 The robotic arm on NASA's Mars InSight lander moves in place over the Heat Flow and Physical Properties Package (HP3) and opens the fingers of its grapple in this image from June 1, 2019.
(Image: © NASA/JPL-Caltech)

NASA has a new plan to get its Mars "mole" digging again.

The agency's InSight lander touched down on the Red Planet last November, tasked with mapping the Martian interior in unprecedented detail. The spacecraft is equipped with two main science instruments: a suite of supersensitive seismometers and the Heat Flow and Physical Properties Package (HP3), a burrowing heat probe known affectionately as "the mole."

InSight deployed both of these instruments on the Martian surface successfully, and the seismometers have already detected two marsquakes. But the mole stopped digging in February at a depth of just 12 inches (30 centimeters) — far short of the prescribed 10 to 16 feet (3 to 5 meters).

The mole may have hit a rock, or the soil surrounding the heat probe may be slicker than expected, mission team members have said. (The mole needs a certain amount of soil friction to dig; otherwise, it will simply bounce in place.)

But it's tough to tell what's holding the mole up, because its support structure blocks InSight's view of the instrument. So, the mission team plans to use the lander's robotic arm to lift that support structure out of the way.

"Engineers at JPL and DLR have been working hard to assess the problem," Lori Glaze, director of NASA's Planetary Science Division, said in a statement. She was referring to NASA's Jet Propulsion Laboratory in Pasadena, California, and the German Aerospace Center, whose German acronym is DLR. (JPL manages the InSight mission, and DLR built the mole.)

"Moving the support structure will help them gather more information and try at least one possible solution," Glaze added.

The lifting maneuver, which the team has been practicing with mock-ups at JPL, will begin on the Red Planet in late June. And InSight's handlers will proceed carefully.

"Over the course of a week, the arm will lift the structure in three steps, taking images and returning them so that engineers can make sure the mole isn't being pulled out of the ground while the structure is moved," NASA officials wrote in the same statement. "If removed from the soil, the mole can't go back in."

Moving the support structure could help the team both diagnose the problem and test a possible solution, said DLR's Tilman Spohn, the HP3 principal investigator.

"We plan to use InSight's robotic arm to press on the ground" after the lifting maneuver, Spohn said in the same statement. "Our calculations have shown this should add friction to the soil near the mole."