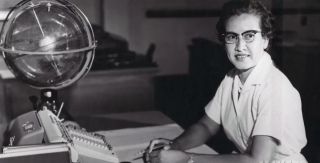 Katherine Johnson, pictured here at NASA's Langley Research Center, where she worked as a computer and mathematician from 1953 to 1986.
(Image: © NASA)

Johnson was a math whiz who joined NASA's predecessor, the National Advisory Committee for Aeronautics (NACA), in 1953. At the time, the Langley, Virginia, office was still segregated and Johnson worked in the West Computing section with other black women. During her first years with the agency, she focused on analyzing data from flight tests and plane crashes.

In the late 1950s, the Soviet Union pushed ahead on spaceflight and the U.S. hurried to keep up. NACA became NASA and Johnson's focus turned to orbital challenges. She calculated the path of Alan Shepard's historic 1961 flight when he became the first American to reach space and she verified calculations a computer had made for John Glenn's equally historic first orbital mission.

Related: How Katherine Johnson Got to the Oscars — With an Astronaut's Help

During the Apollo era, Johnson made those same calculations for the Apollo 11 trajectory, and her math helped ensure that the lunar lander and the command module interacted properly, according to NASA. She also worked on emergency procedures and backup charts, which were used in 1970 during the Apollo 13 mission. After an explosion rendered the command module unsafe, astronauts skipped landing on the moon, instead heading straight back to Earth in the lunar lander.

Johnson's math also informed the shuttle program and plans for Mars missions. She retired from NASA in 1986, having spent 33 years with the agency.

In 2016, the book and movie "Hidden Figures" highlighted Johnson's story and those of her colleagues in the West Computing section of NACA. Johnson appeared at the 2017 Oscars ceremony and received a standing ovation, although the film did not win the best picture award for which it was nominated.

NASA honored the mathematician earlier this year by renaming its Independent Verification and Validation facility in her home state of West Virginia in her honor; the agency's Langley campus had already named a computational research facility for her as well.