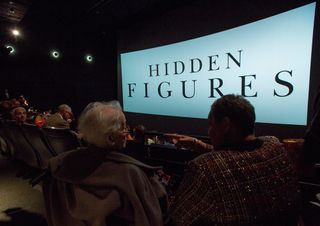 Katherine Johnson (left) sits in the audience for a special screening of "Hidden Figures" at NASA's Langley Research Center Dec. 1. The film dramatizes her work computing trajectories and developing the mathematics of orbital flight in the early 1960s.
(Image: © NASA Langley via Flickr)

NEW YORK — The upcoming film "Hidden Figures," which chronicles the work and lives of African American women at NASA in the 1960s, opens with a policeman stopping three women in their car on their way to work.

"The black folks in the audience all braced themselves," said Taraji Henson, who plays NASA mathematician Katherine Johnson in the movie. Henson was speaking at a press conference Sunday (Dec. 12) in New York City.

Ted Melfi, the film's director, noted the scene was filmed before a string of incidents in which black drivers were shot by police at traffic stops came to light. The scene is one of many that might resonate with what African Americans face today, even though a lot has changed since that era. Besides having an eerie parallel with current events, the scene showed something Henson said was emblematic of women's experiences working in difficult conditions. [On 'Hidden Figures' Set, NASA's Early Years Take Center Stage]

"I think the opening scene for me is an opening metaphor for what was to come in their lives — the love and fidelity they had as friends," Henson said.

John Glenn famously asked for Johnson herself to double-check the work done by an electronic computer before Glenn's famous orbit around Earth, which made him the first American in orbit. The women were also instrumental in developing the math that helped bring Apollo 13 home.

Johnson was born in the town of White Sulphur Springs, West Virginia, and couldn't go to high school because her county wouldn't offer education to black students past the eighth grade. She went to high school in another town instead, and eventually got into college at the age of 15, graduating three years later.

Johnson joined NASA's precursor agency, the National Advisory Committee for Aeronautics (NACA), in 1953. Dorothy Vaughan, played by Octavia Spencer, and Mary Jackson, played by Janelle Monáe, are also spotlighted in the movie. Vaughan started at NACA in 1943 as a computer, worked on coding NASA's new electronic computers and later worked on NASA's Scout family of rockets. Jackson joined NACA in 1943, and was among the first at the agency to transition from a computer role to that of an engineer. In the 1950s and 60s, she analyzed data from wind-tunnel experiments and test flights.

All three women worked on Langley's campus in Hampton, Virginia. This was one of the states where segregation was enforced by law; NASA abided by that, separating the black workers from the white. This included the "computers," whose job it was to calculate trajectories and analyze data.

Of the three, only Johnson, now 98, is still living. Vaughan died in 2008, and Jackson in 2005. The actors said the fact that their roles depict real people added an extra layer of professional responsibility.

"Portraying a person that's very real — there's a responsibility to get it right," Henson said. "I had to fly down with [director] Ted [Melfi]. … She came, and it was just like, 'Wow, I am in the presence of a real-life superhero.'"

"It is important to learn all you can, so you aren't doing some sort of mimicry," Spencer said. "Ted gave us a lot of the archival footage from NASA and gave us a lot of the manuscript [for the book the movie is based on]." The book, she noted, was being written simultaneously with the film. "For me, the research part was integral. There are enough negative images of black women out there, and I did not want to portray her in any stereotype."

Also at the press conference was astronaut Stephanie Wilson, the second African-American woman to go into space (the first was Mae Jemison). Wilson said the book and the movie brought out a story that hadn't been told previously: "I had heard early stories of one woman validating calculations for the Glenn flight," she said. "But nobody knew the name.

"I have been very fortunate to go in to space. It's a wonderful privilege to stand on their shoulders," she added.

The women were working in an environment where just being there was an accomplishment — it wasn't just about public protests. "Every day was not a march," Henson said. "Your hard work will open the door for someone coming behind. It's about diversity. People hear diversity, and they automatically think black and white. When you talk about diversity, you talk about women, disabled people, LGBT [lesbian, gay, bisexual and transgender] people."

That issue of diversity is one reason Henson said she thought the project was important, especially as girls are sometimes subtly discouraged from pursuing mathematics and science. "No one ever [specifically] said to me, 'You can't do math because you're a girl,' but math was for boys when I was growing up," she said. "Somebody lied to me. I didn't want another girl to grow up believing the lie."