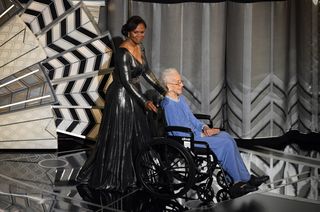 NEW YORK — Astronaut Yvonne Cagle had a critical job to perform in February: Escort 98-year-old mathematician Katherine Johnson across the country to the Academy Awards to be honored alongside the movie spotlighting her life, "Hidden Figures."

Cagle described their journey Friday (June 2) at "Hidden Figures No More," a panel featuring women in spaceflight at the 2017 World Science Festival in New York City. The panel was supported by the Alfred P. Sloan Foundation — as, in fact, was the book "Hidden Figures" that served as the movie's basis.

The film's producers first reached out to Cagle to ask whether it'd be possible for Johnson to make a journey to the Oscars — and Cagle said they'd have to ask Johnson to find out.

"Certainly there were risks in flying her from Virginia all the way to Los Angeles; she was 98 years old — in August she'll be 99 — and you just don't fly a 98-year-old that far on an airplane," Cagle said. "But she said absolutely — don't leave me out."

Johnson lives near the site of NASA's Langley Research Center; she worked there as a computer and mathematician to calculate trajectories for many of the most crucial and iconic space missions. Her work on the first crewed American orbital flight, with John Glenn, forms the center of the "Hidden Figures" film.

A Langley computation facility was recently named for Johnson, and she also received the Presidential Medal of Freedom from Barack Obama — the nation's highest civilian honor.

In a way, she said, Cagle was the perfect person for the task: As a flight surgeon in the Air Force, she had specialized in providing medical support and rescue during flight. But she had expected that would be the end of their journey together to the Oscars.

"Fortunately, she made it all the way there, and at the dress rehearsal we were all celebrating; they must have seen the rapport that Katherine and I had, and asked that I be the one to actually escort her onto the stage as opposed to one of the actresses coming in and bringing her on," Cagle said. "That meant that I had just a few hours to get ready; that, I think, is a transformation in itself."

Johnson's appearance onstage was a surprise to the audience — and they welcomed her with thunderous applause.

"When I saw her just open and brighten up, I saw that she had that 'get it' factor," Cagle said. "That what she had done was something epic and transformative."

"For me, it really validated my journeys, my struggles, my aspirations," Cagle added — "And I know if it could affect me in that way, that all the young girls of all ages watching that movie and that story were moved in a way that made us feel one collective mind, one collective heart. One collective voice of empowerment."