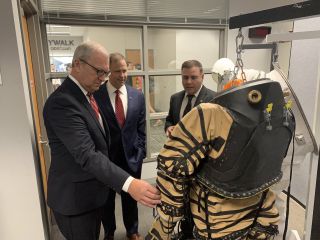 NASA Administrator Jim Bridenstine (center) reviews the NDX-1 pressurized spacesuit, made at the University of North Dakota, along with spacesuit principal investigator and UND professor Pablo de Leon (right). At left is North Dakota senator Kevin Cramer. In a tweet accompanying this picture taken on Sept. 4, 2019, Bridenstine said of the NASA-funded spacesuits, "The work being done here will benefit our #Artemis program to send humans to the Moon and our eventual missions to Mars and beyond."
(Image: © Jim Bridenstine/Twitter)

During a tour across the United States to build political support for the Artemis moon program, NASA Administrator Jim Bridenstine stopped by the University of North Dakota (UND) on Sept. 4 to check out its spacesuits and host a town hall for students.

With the livestreamed town hall, Bridenstine became the first NASA head to visit UND since Dan Goldin, whose tenure ended in 2001. The university's department of space studies was founded after Apollo 11 astronaut Buzz Aldrin came to campus in the early 1980s to help create a space education program at the college, along with then aerospace sciences dean John D. Odegard, according to the department's website. The department's work includes pressurized spacesuit research and a NASA-funded habitat where teams simulate space missions on planetary surfaces.

Bridenstine and Sen. Kevin Cramer, R-N.D., spent the morning touring several NASA-supported UND facilities, including a spacesuit laboratory and a habitat for space mission simulations. And while Bridenstine didn't say it directly, it appears he's looking at the UND spacesuits very closely as he's planning for missions to the moon.

"The work being done here will benefit our #Artemis program to send humans to the Moon and our eventual missions to Mars and beyond," Bridenstine said of the NASA-funded UND spacesuit program in a tweet.

He also had high praise for the university in the town hall.

"This little university up here in Grand Forks packs well above average and is doing great things not just for NASA, but for the country," Bridenstine said, singling out the spacesuit research as "second to none." He added, "I look forward to continuing this great relationship for NASA and the country and to do more than we'd ever been able to do before."

Bridenstine has only five years to figure out how to land people on the moon to meet the Trump administration's accelerated deadline for the feat, of 2024. In April, Bridenstine told the House science committee that NASA will need new spacesuits for exploring the lunar terrain, since the suits astronauts use on the International Space Station work only for floating spacewalks. (The Apollo spacesuits used a design that is now more than 50 years old and that needs to be updated to take into account advances in materials, life support, scientific understanding of how humans operate in space and the like.)

UND had two moon- or Mars-friendly spacesuits to show Bridenstine: NDX-1 and NDX-2, developed under the leadership of Pablo de León, head of the university's Human Spaceflight Laboratory. The UND spacesuits are fully pressurized and feature a "rear entry" for astronauts. They can even be attached to a habitat on the outside so the astronauts can enter the spacesuit, close the suit door behind them and start the spacewalk. This feature minimizes the abrasive dust and other stuff from outside that the suits will drag into clean living facilities — a big problem in the Apollo program.

The older, NDX-1 version has already been tested in several space "analogs," including UND's Inflatable Lunar/Mars Habitat, where groups of three or four people live as astronauts for a week or two. A newer version, called NDX-2, is under testing in the lab. (I recently earned a Ph.D. at UND and tried out the NDX-2 this summer after completing my dissertation.)

Bridenstine told UND students he spent the summer congressional recess individually meeting with U.S. representatives and senators to discuss the importance of the Artemis program, often appearing at events of consequence to NASA and those political representatives.

In August, Bridenstine was in Northern California with House Speaker Nancy Pelosi (D-Calif.) and Congresswoman Anna Eshoo (D-Calif.) for a Women's Equality Day event. (One of NASA's policy lines about Artemis is that the program will "land the first woman and the next man" on the moon.) And this week, Bridenstine came to North Dakota at Cramer's request.

"He's kind of like my boss [because] he's one of the people who fund my agency," Bridenstine joked of Cramer — although, in reality, the two men also have a friendship borne out of being elected to Congress the same year, in 2012. Still, Bridenstine joked that when Cramer asked the administrator to come to UND, his response was an instant: "Yes, sir, we'll be there next week."

From his remarks, Bridenstine appears to be building these political relationships as a student of NASA's history, as well as a NASA administrator. The moon-to-Mars initiatives of presidents George H.W. Bush and George W. Bush in the 1980s and 2000s failed for multiple reasons, Bridenstine explained to UND students, including being insensitive to the political environment at the time.

NASA needs to learn from those mistakes, Bridenstine said. The first initiative, in 1989, proposed removing funds from the International Space Station, which angered representatives of states where NASA has a large job presence: Florida, Texas and Alabama. The 2004 plan would have "cannibalized" NASA science programs, Bridenstine continued, a move that killed hopes of bipartisan support.

Bridenstine was named administrator in April 2018, while NASA was already working on plans for a Lunar Gateway space station and future human moon landings. The agency initially planned to put people on the moon in 2028, Bridenstine said. But when it came time for the executive branch to approve that budget, "the president and the vice president saw that and they said it wasn't good enough," Bridenstine said.

The White House's concern, he said, was that NASA programs can be chopped if they take too long, especially if they stretch into a new presidential administration. Bridenstine agreed to the new deadline of 2024, which may fall within the Trump administration's era if the president is reelected in 2020.

But Bridenstine has warned repeatedly that more resources, including money, will be necessary to meet the accelerated deadline. He told UND students that the Artemis budget is $30 billion, in line with estimates from June. Thanks to commercial partners, international contributions, more-advanced hardware and innovative contract practices, this is far below the Apollo program's estimated cost, in today's dollars, of $288 billion.

And it's at universities like UND, perhaps, where Bridenstine will look to find some of the technology he needs to advance the moon program. "One thing that is unique about NASA," he told students, "is we have these great relationships with universities. In the university setting, we can do things you can't do in many other cases."

At those schools, he explained, aerospace scientists and engineers work alongside each other and make the "trades" — the engineering trade-offs that consider cost, materials and other design elements — very early in the process. Other time and cost savings come from using university staff and professors on hand and bringing in student researchers.

"The goal, ultimately, is to produce something that is on cost and on schedule, he said. "The universities have a way of achieving that that is very unique."

Bridenstine added that NASA will not achieve the 2024 moon-landing deadline using the traditional contracting process where the agency uses purchases, owns and operates hardware. A typical cycle of issuing requests for proposals, awarding contracts and allowing time for other bidders to file protests could easily take up three or four years.

Rather, he said NASA will rely on buying services from other companies using an agency practice called "other transaction" authorities. This contracting process, he added, is already used in space station agreements for commercial cargo spacecraft (currently involving SpaceX and Northrop Grumman, with others coming) and future commercial crew vehicles (involving Boeing and SpaceX).

"NASA needs to be one customer of many customers and [part of] a very robust commercial marketplace," Bridenstine said. "We need to have numerous providers competing against each other on cost and innovation. If we achieve that, we will be able to do more with less than ever before."