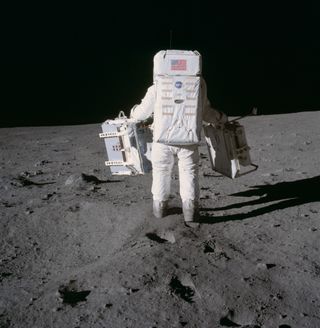 We visited the moon half a century ago, and have not been back since. During that time, we've launched robotic spacecraft across our solar system and learned about distant worlds. Meanwhile, scientists continue to ponder the rocky visitor to our night sky.

The Apollo missions helped us solve many of the moon's mysteries, but there are still many more questions that have been left unanswered — and even a couple that arose as a result of the samples brought back by the Apollo astronauts.

"There are numerous scientific questions that have emerged in part of the Apollo evidence," Roger Launius, former NASA chief historian, told Space.com. "There's a whole series of things to be gained from going back, such as collecting additional material and gathering new data."

Related: 10 Things You Didn't Know About the Moon

As NASA prepares to send astronauts to the moon once again by the year 2024, and amid mixed messages from the U.S. administration regarding the upcoming mission, scientists reaffirm that the moon still holds many secrets that we need to explore.

"We have a lot of great questions," Sarah Noble, the Apollo next-generation sample analysis program executive at NASA headquarters in Washington, told Space.com. "What has happened over the past decade was that we put a lot of things in the orbit around the moon, which has given us a global picture.

"We know where to go to answer these questions now," Noble added.

Nearly 40 years after returning from the moon, water was found inside rock samples brought back by the Apollo 15 mission. The 2009 discovery opened up a whole new area of lunar research because it suggested that water could have existed on the moon since its formation.

Having water on the moon is crucial for future space exploration, as it could be used  for drinking water and rocket fuel.

"For 40 years, we thought the samples were completely dry," Noble said. "We now understand that there's a water cycle, but we don't understand how it works."

We may not understand the water cycle yet, but we do have the tools to crack it now.

"From my perspective, we have all kinds of instruments that didn't exist before," Paul Hayne, assistant professor at the Department of Astrophysical and Planetary Sciences at the University of Colorado, told Space.com.

Hayne added that the instruments have become so miniaturized that they now easily fit into spacecraft.

Aside from water, recent evidence also suggested that there is ice on the moon. A 2018 study confirmed that there was frozen stuff on the ground in the moon's north and south poles.

"The one [question] that I'm very interested in is the question of ice and the poles," Hayne said. "We'd like to know how much [ice there is] and where, and collect new data to investigate this."

In order to detect the ice on the lunar surface, Hayne said that there are new tools such as infrared instruments to detect the chemical fingerprint of ice, thermal cameras and other heat-sending tools.

Samples of basaltic rocks, or solidified molten lava, brought back by the Apollo missions were mostly old, but some were found to be as young as a billion years old, according to Noble. (Scientists believe that the moon itself is 4.51 billion years old.)

Scientists know that volcanic eruptions took place on the lunar surface, but they are still unsure about the timeline over which these eruptions occurred and when the moon stopped being volcanically active.

"There's still some questions about how active the moon is today — that's kind of a hot area," Hayne said.

He added that besides not knowing when these volcanic eruptions stopped occurring, we also don't know what caused them in the first place — whether they were triggered by a giant impact to the moon or if the moon is radioactive.

Recent research has pointed out that moon rocks are rich in radioactive material like uranium, and a 2014 paper in Nature suggested that heat-producing elements like uranium, thorium and potassium are causing the lunar surface to expand and contract as it gets hotter and cooler. The cracks on the surface caused by this process would have allowed for the lava to flow through them.

Hayne suggests that scientists need to revise their models of the moon's volcanic activity as most of them think that it stopped being active a long time ago, which may not be true — some scientists believe that the moon is still tectonically active.

There is also debate over how old our moon is, with ages ranging from 4.5 billion years to a much younger 150 to 200 million years.

According to Noble, scientists have attempted to estimate the moon's age by analyzing the lunar rocks brought back by Apollo and by trying to date when the craters formed on the lunar surface, but there has been no consensus thus far.

"It's one of the big questions we want to answer," Noble said.

However, Noble added, it's not just about determining the moon's age but rather figuring out the ages of other rocky bodies in the solar system such as Mercury or Mars.

Once we know the age of the moon, we can estimate the age of other planets by comparing the number of craters between the moon and Mars or Venus. The more craters there are on the surface, the older the rocky body is.

Collecting as much information as we can from the moon will also eventually lead to a better understanding of other planetary objects in our solar system that we want to explore in the future.

"The moon can help us understand how to live and operate on another body, say, for example, if we go to Mars," she said.

Amid an ongoing debate over whether we should return to the moon, lunar scientists reaffirm that it is absolutely necessary we do it for the sake of future space exploration and to learn more about our own planet.

"As a lunar scientist, I'm very excited about the science we can do on the moon," Noble said. "Our current plan is to hit the moon so we can move on and hit Mars."

Hayne agreed. "We have so much to learn still about the moon, which then not only tells us about other planets in the solar system but about the Earth itself," he said.

"Lastly, it's exciting," Hayne added. "It inspires people. There's no substitute to having boots on the ground."