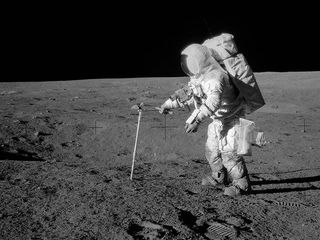 Radioactive iron in moon rocks collected by astronauts on NASA's Apollo missions suggests that a nearby supernova blasted Earth a few million years ago, according to a new study.

This finding supports the idea that nearby stellar explosions may have influenced life on Earth, including the evolution of humans, the researchers said.

Supernovas are powerful explosions from gigantic dying stars. These outbursts are visible all the way to the edge of the universe, and are bright enough to briefly outshine all of the other stars in their host galaxies. [Awesome Photos of Supernova Explosions]

Previous research found that supernovas generate huge amounts of a mildly radioactive variety of iron known as iron-60, which these cataclysmic explosions spew out into space. Other natural ways of creating iron-60 produce only up to one-tenth as much.

Now, scientists have discovered unusually high levels of iron-60 in moon rocks gathered during Apollo missions 12, 15 and 16 between 1969 and 1972. This finding suggests that debris from a nearby supernova sprayed Earth and the rest of the solar system in the past few million years.

Iron-60 has a half-life of about 2.6 million years, meaning that about half of any given sample of iron-60 will break down every 2.6 million years or so. This is relatively short compared to the 4.6-billion-year age of the solar system, so the iron-60 seen in these lunar samples probably came from a fairly recent and close supernova, the researchers said.

"We could identify iron-60 expelled from one or more supernovae on the surface of the moon," study co-author Gunther Korschinek, a physicist at the Technical University of Munich in Germany, told Space.com.

Korschinek and his colleagues first discovered evidence of a supernova impact on Earth in 1999, in the form of high iron-60 concentrations in ancient deep-sea rocks. However, the pristine nature of these lunar samples compared to Earth rocks helps to provide a more accurate estimate of the total amount of debris from nearby supernovas. This estimate, in turn, can help scientists pinpoint when and where these supernovas happened — between 1.7 million and 2.6 million years ago, and about 300 light-years from Earth, supporting recent findings, the researchers said.

Prior research suggested that nearby stellar explosions could have influenced life on Earth by disrupting global climate and even triggering mass extinctions. A supernova about 300 light-years from Earth would have slightly increased the amount of cosmic radiation the planet received about 2 million years ago, Korschinek said — around the time when the human lineage first evolved.

"There are scientific discussions that cosmic radiation might influence cloud formation in our atmosphere," Korschinek said. "If so, we can also expect a drop of the temperature at that time. Climate changes, which started several million years ago, are considered as driving forces of our evolution. In conclusion, we can speculate that these supernovae have influenced human history."

Future research can look for other supernova debris on the moon, which could help confirm which nuclear reactions occur during these catastrophic explosions, Korschinek said.

The scientists detailed their findings online April 13 in the journal Physical Review Letters.