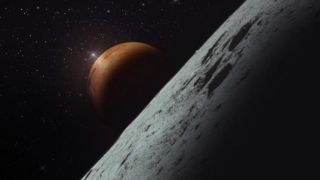 A White House official confirmed the moon is still a priority for human spaceflight after a tweet from President Donald Trump.
(Image: © NASA)

ARLINGTON, Va. — A day after President Trump appeared to cast doubt on NASA's plans to send humans to the moon, a White House official said the moon remained a goal of the agency's programs as a step towards Mars.

In a luncheon speech at the National Space Society's International Space Development Conference here June 8, Scott Pace, executive secretary of the National Space Council, said that efforts to return humans to the lunar surface by 2024 were ongoing, but that NASA and the administration should devote more attention to long-term aspirations of human Mars missions.

Pace was scheduled to speak at the conference long before President Trump’s comments in a June 7 tweet that appeared to criticize current plans. "For all of the money we are spending, NASA should NOT be talking about going to the Moon – We did that 50 years ago," he wrote. He said NASA should emphasize other objectives, including Mars.

Related: Will NASA's Rush to the Moon Get Us to Mars Any Faster?

Pace didn't address the tweet in his prepared remarks, but when asked by an audience member in a subsequent question-and-answer session about the tweet, referred to a statement by a White House official June 7 noting that Mars was a long-term goal of NASA's human spaceflight efforts. "We have asked Congress for additional resources to get to the moon by 2024, which will enable us to get to Mars roughly a decade after creating a sustainable presence on the lunar surface," the official said on background.

Pace said that the president's comments was a criticism not of going back to the moon but rather not paying more attention to that long-term goal. "We're head down, coloring hard, working on the immediate execution of this," he said, such as development of the elements of the lunar Gateway or lunar landers.

"I don't think we always do a good job speaking to the larger vision that this is part of," he said. "What he's doing is stepping back and expressing, I think, a very understandable impatience with how long all of that takes, and sometimes we miss the bigger picture."

He called the current administration the "space friendliest" White House he has seen in his career, citing close relationships with various administration bodies, including the Office of Management and Budget (OMB). "The reason for that is that there’s very clear direction coming from the president and the vice president as to what needs to be done," he said. "The president and vice president are totally in sync with each other about where they want to go, which makes my life a bit easier."

Pace said the White House was focused on securing the additional $1.6 billion for NASA in the fiscal year 2020 budget amendment released in May, which includes funding needed to start development of lunar landers. "Probably the highest priority thing we need to do is to get the lunar lander under contract," he said.

He noted Congress wanted to see long-term budget projections that estimated the cost of achieving a landing in 2024. Those projections, he said, face two challenges. One involves the technical details of the plan, which he said the administration was in "pretty good shape" on with the development of a minimal Gateway and landers.

Pace also used the speech to defend the Gateway. One audience member criticized plans to develop the Gateway now, saying it should be reserved for a later stage of lunar exploration when it could serve as a fuel depot.

"This is a conversation I had with Mike Griffin as well," Pace responded. Griffin, the former NASA administrator who is now under secretary of defense for research and engineering, criticized the Gateway during a meeting of the National Space Council’s Users' Advisory Group in November.

Pace said the Gateway is driven by the limitations of existing elements of the transportation architecture, like the Space Launch System and Orion spacecraft, as well as a lack of experience in deep space operations. "You can certainly make the argument we're doing it out of sequence of what an ideal system architecture would look like," he said. “But we’re not starting with a clean sheet of paper."