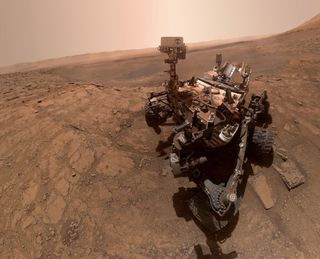 SAN FRANCISCO — NASA's Curiosity rover may have just taken a big step toward cracking at least part of the Mars methane mystery.

Curiosity's measurements show that methane levels cycle seasonally inside the Red Planet's 96-mile-wide (154 kilometers) Gale Crater, which the rover has been exploring since August 2012. The six-wheeled robot has also detected several big surges of the gas, which is a possible (though far from definitive) sign of Mars life.

But here's where the mystery comes in: The view from above is very different. The European-Russian Trace Gas Orbiter (TGO), which was designed to sniff out low-abundance gases such as methane, has found the Martian air to be virtually free of the stuff.

Related: The 7 Biggest Mysteries of Mars

For example, TGO recorded an upper limit of 0.012 parts per billion (ppb) methane during its first four months of full science operations, which lasted from April through August 2018. That's about 35 times lower than the background methane levels Curiosity measured inside Gale over the same period.

And neither TGO nor Mars Express, a European probe that has been orbiting the planet since December 2003, spotted the most recent methane spike that Curiosity detected. During that event, which occurred on June 19 of this year, methane concentrations at the rover's location rose to a whopping 21 ppb — the highest levels that Curiosity had ever recorded. (Mars Express did, however, independently observe the first methane surge that Curiosity spotted, in June 2013.)

The discrepancy between ground measurements and orbital data has the Curiosity team "mystified, just like everyone else," mission principal investigator Ashwin Vasavada said here last week during a media roundtable at the annual fall meeting of the American Geophysical Union (AGU).

Perhaps something in the Martian atmosphere destroys methane very quickly, scrubbing away most of the gas that rises above Curiosity and therefore leaving little for TGO or Mars Express to detect, said Vasavada, who's based at NASA's Jet Propulsion Laboratory in Pasadena, California. But that's not the only possible explanation.

"Maybe the expansion and contraction of the atmosphere every day from solar heating is responsible," he told Space.com after the roundtable.

Curiosity's previous methane measurements — which the rover makes using its Sample Analysis at Mars instrument, or SAM — have been gathered at night, Vasavada said. That's not surprising, considering how busy the rover is during the day studying rocks in minute detail and/or driving across the rugged Red Planet landscape. But it means that Curiosity had sniffed only when the atmosphere was relatively dense and the methane concentrated as a result.

During the day, as the atmosphere expands, the methane becomes more mixed and diffuse — perhaps diffuse enough to explain, at least in part, why the orbiters' observations are so different.

The Curiosity team is testing this idea. Over this past weekend, the rover was scheduled to make its first-ever detailed daytime methane measurement.

"This rare experiment is a chance to get some exciting science observations, but we'll need time after the experiment to analyze the data; we don't expect to have any takeaways right away," science team member Catherine O'Connell, a planetary geologist at the University of New Brunswick in Canada, wrote in a mission update on Friday (Dec. 13).

The results, whatever they may be, will not solve the entire Mars methane mystery, for it's a multilayered one. For example, scientists don't know how the gas was produced. Most of the methane in Earth's air was emitted by living creatures, but the stuff can be created abiotically as well — specifically, by reactions involving hot water and rock.

And even if Mars' methane is biogenic — a very big if — there's no guarantee it's a sign of active life. The gas may have been generated billions of years ago in underground pockets, from which it's now slowly seeping, mission team members have said.

The Curiosity team also recently announced intriguing results about another possible biosignature gas. The rover's measurements show that oxygen levels rise considerably higher than expected in the spring and summer and drop below predicted concentrations during the Gale Crater winter.

The main goal of Curiosity's $2.5 billion mission involves assessing the habitability of Gale Crater. The rover has already accomplished that objective, finding that Gale hosted a long-lived lake-and-stream system in the ancient past.

Since September 2014, Curiosity has been picking its way up Mount Sharp, the 3.4-mile-high (5.5 kilometers) mountain that rises from Gale's center, searching for clues about Mars' long-ago transition from a relatively warm and wet world to the cold, dry planet it is today.