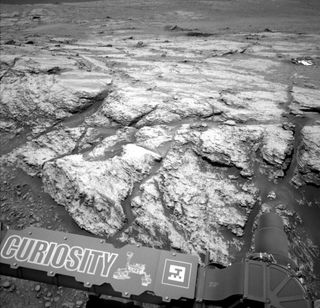 This image was taken by the left Navcam on NASA's Curiosity Mars rover on June 18, 2019. It shows part of "Teal Ridge," which the rover has been studying within a region called the "clay-bearing unit."
(Image: © NASA/JPL-Caltech)

NASA's Curiosity rover has sniffed out another surge of the potentially life-indicating gas methane on Mars, and this one is the biggest yet.

The new result is exciting, because the vast majority of methane in Earth's air is generated by microbes and other organisms. But we can't assume Martians were involved. Methane can also be produced abiotically — via the reaction of hot water with certain types of rock, for example.

"With our current measurements, we have no way of telling if the methane source is biology or geology, or even ancient or modern," Paul Mahaffy, of NASA's Goddard Space Flight Center in Greenbelt, Maryland, said in a statement. Mahaffy is principal investigator of Curiosity's Sample Analysis at Mars (SAM) instrument, which detected the recent surge.

.@MarsCuriosity rover found the largest amount of methane ever measured during the mission. Although this is an exciting discovery, it doesn’t necessarily mean life exists because methane can be created through interactions between rocks & water. Details: https://t.co/XYUfpHIqcs pic.twitter.com/I14q6niDETJune 23, 2019

Curiosity has also sniffed out two other spikes of the gas — one in June 2013 and another that lasted from late 2013 through early 2014. Both of those were considerably smaller, peaking at around 6 or 7 ppbv, according to the rover's measurements

This past April, scientists announced that Europe's Mars Express orbiter had confirmed the June 2013 surge. But not all orbital measurements add up so nicely.

For example, the Trace Gas Orbiter, a joint European-Russian probe designed to hunt for methane and other low-abundance gases in the Martian atmosphere, found hardly any methane at all during its first round of observations last year.

The SAM team conducted a separate experiment over the weekend in an attempt to better understand this most recent methane spike, and perhaps get a better handle on the many mysteries swirling around the gas.

"Combining observations from the surface and from orbit could help scientists locate sources of the gas on the planet and understand how long it lasts in the Martian atmosphere," NASA officials said in the same statement. "That might explain why the Trace Gas Orbiter's and Curiosity's methane observations have been so different."