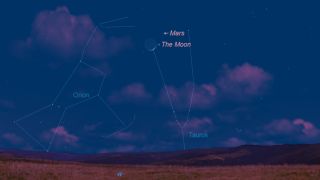 The slender crescent moon meets up with Mars in the night sky on Tuesday (May 7), and you can catch the cosmic duo above the western horizon after sunset.

Just three days after the new moon, the waxing crescent will look like a tiny sliver when it passes by the Red Planet on Tuesday. The two objects will be at their closest at 8:21 p.m. EDT (0021 GMT), when the moon will pass 3.2 degrees to the south of Mars, according to the skywatching site In-the-Sky.org. Both objects will be in the constellation Taurus.

About 45 minutes earlier, Mars will be in conjunction with the moon, which means that they will share the same right ascension – the celestial equivalent of longitude. The last time these two objects were in conjunction was on April 9, and they will reach conjunction again on June 5.

Both the moon and Mars will already be visible in the sky before sunset on Tuesday, but will be difficult to observe while the sun's bright glare is still in the way. In New York City, for example, Mars will rise at 7:48 a.m. local time, followed by the moon just 3 minutes later; the planets will set at 11:05 p.m. and 10:56 p.m., respectively, according to timeanddate.com. The sun will set at 7:58 p.m. in New York, giving skywatchers up to 3 hours to observe the moon and the Red Planet.

Late-night skywatchers (or early risers on Wednesday, May 8) can also see Jupiter and Saturn in the night sky. Jupiter rises in the southeast at 10:43 p.m. local time in New York City and sets again at 7:55 a.m. Wednesday morning.

Saturn rises a bit later, at 12:35 a.m. on Wednesday, and sets again at 9:57 a.m., according to timeanddate.com. But you'll have to be up before the crack of dawn to see these celestial bodies in the morning sky; the sun will be up at 5:46 a.m. (You can find out exactly when the sun, moon and planets will rise and set from your specific location at timeanddate.com/astronomy.)