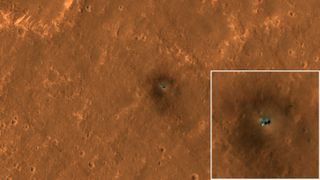 The HiRISE camera on NASA's Mars Reconnaissance Orbiter got its best view yet of the agency’s InSight lander on September 23, 2019.
(Image: © NASA/JPL-Caltech/University of Arizona)

New photos give us the best-ever look at NASA's InSight lander on the surface of Mars and show the route the agency's Curiosity rover is taking up a big Red Planet mountain.

The imagery comes courtesy of the HiRISE camera aboard NASA's Mars Reconnaissance Orbiter (MRO), which has been circling the Red Planet since March 2006.

HiRISE has been studying Elysium Planitia — the equatorial site where InSight touched down in November 2018 — in an attempt to document changes in the landscape, such as dust devil trails, NASA officials said. And the camera managed to capture a great view of InSight during such work last month.

"Taken on Sept. 23, 2019, at an altitude of 169 miles (272 kilometers) above the surface, the new image is NASA's best view yet of InSight from space," NASA officials wrote today (Oct. 16) in a description of the newly released photo. "It clearly shows the two circular solar panels on either side of the lander body, spanning 20 feet (6 meters) from end to end."

Much smaller details are visible as well. For example, the shiny object near InSight's lower side is the cover for the lander's seismometer suite, which shields the supersensitive instrument from the elements. This cover is so bright because it is dome-shaped and therefore reflects a lot of light, NASA officials said.

The dark patch surrounding InSight was caused by the lander's thrusters during its touchdown last year. And the fainter dark streaks that run diagonally across the photo are tracks from dust devils, NASA officials said.

HiRISE, which is short for High Resolution Imaging Science Experiment, has photographed InSight before. But this latest image is clearer than previous shots because there's less dust in the air, NASA officials said. MRO's viewing angle and favorable lighting also contributed to a crisp and clean image.

"Shadows are offset from the lander because this is an oblique view looking west," NASA officials wrote in the photo description. "The lighting was also optimal for avoiding the bright reflections from the lander or its solar panels that have obscured surrounding pixels in other images."

NASA also released today two HiRISE photos of Curiosity that show the rover's recent route through the foothills of the towering Mount Sharp. The two images were captured on May 31 and July 20 of this year. During that span, Curiosity traveled 1,106 feet (337 m), moving from an area dubbed "Woodland Bay" to another site known as "Sandside Harbour," NASA officials said.

Curiosity landed inside Mars' 96-mile-wide (154 km) Gale Crater in August 2012, on a mission to assess the region's past life-hosting potential. The rover quickly found evidence that Gale could have supported Earth-like life long ago, then headed for the foothills of Mount Sharp, which rises 3.4 miles (5.5 km) into the sky from Gale's center.

Curiosity reached the mountain's base in September 2014 and has been climbing ever since. The six-wheeled robot is reading the rock layers as it ascends, hunting for clues about how and when Mars transitioned from a relatively warm and wet world to the frigid desert it is today.

InSight, meanwhile, is gathering data that should help scientists construct a detailed map of the Martian interior.