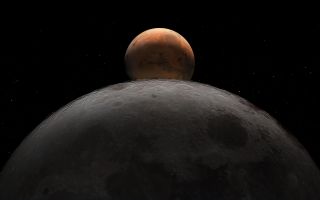 The moon could be a valuable place to learn before astronauts head to Mars.
(Image: © NASA)

WASHINGTON — The coming generation of moon explorers should consider using lunar habitats as a test bed for future Mars missions, said a representative from the French space agency.

Erwan Beauvois, a space operations engineer with the National Centre for Space Studies, suggested that designers should work on designing an artificial ecosystem on the moon that would use bacteria, algae and other microorganisms to recycle air and waste and produce food. (Crewmembers on the International Space Station use a life support system instead that recycles water and oxygen but requires resupplies for items such as food.) Once the bioregenerative system is established on the moon, Beauvois argued, we should apply that same concept to the Red Planet.

"There's a long road leading to sustainability, but there are opportunities for technology transfer," Beauvois said here in his technology presentation on Oct. 23 at the International Astronautical Congress. "A good moon program is a good Mars program. If you think of the space program as a road map, it can be coherent, and it is pretty beneficial to do this."

NASA and several other space agencies and private companies are eyeing the moon as the next frontier for space exploration. As NASA plans to put humans on the surface by 2024, entities ranging from the Japan Aerospace Exploration Agency to private company Moon Express are discussing how to build settlements and land machines to work cooperatively, potentially building a new lunar economy in the process. NASA's eventual goal is to apply the lessons learned at the moon to launch human missions to Mars.

There are vast differences, of course, between the moon and Mars, Beauvois acknowledged. While both of these locations are rocky worlds, Mars has a thin atmosphere and weather, while the moon is a nearly airless body only disturbed by radiation and the occasional micrometeorite.

The differences mean that at Mars, parts of the Red Planet environment could be integrated into a bioregenerative life support system. For example, methane or water ice resources on Mars could augment the supplies astronauts bring with them.

So why test at the moon before going on to Mars? For one thing, Beauvois said that people at both locations have the same needs. Astronauts would need to figure out how to supply their own power, to find water and to use the resources available to build structures and to live and work on the surface.

Technologies that extract water from moon dust, for example, could be applied to the regolith on Mars. The same goes for processes such as 3D printing, which would likely use the lunar (or Martian) regolith to enhance the shielding or to assist with putting together the structure. Also, astronauts on the moon could test surface fission nuclear reactors to ensure they would be useful on Mars.

Beauvois also pointed to life support systems. He suggested that designs for inflatable and transparent structures from the moon could be exported to Mars, as long as those structures were adapted for the differences in air pressure on the two worlds. The technology for water recycling, for growing plants in low light and for using biofuels in engines could also be applied in both locations.

Working on the moon could allow researchers to answer questions — such as what species grow well in these environments — before shipping these technologies farther out in the solar system, where it is harder to make adjustments as you go along, he added.