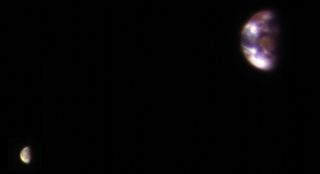 This view of Earth and its moon combines two images acquired on Nov. 20, 2016, by the HiRISE camera on NASA's Mars Reconnaissance Orbiter, with brightness adjusted separately for Earth and the moon to show details on both bodies. Relative sizes and distance are correct. Earth and Mars were about 127 million miles (205 million kilometers) when the photos were taken.
(Image: © NASA/JPL-Caltech/Univ. of Arizona)

A NASA spacecraft has given humanity a breathtaking, Mars-eye view of Earth and its moon.

The Mars Reconnaissance Orbiter (MRO) used its High Resolution Imaging Science Experiment (HiRISE) camera to capture this new telescopic image of our planet and its natural satellite on Nov. 20, 2016. At the time, Mars and Earth were about 127 million miles (205 million kilometers) apart, NASA officials said.

The amazing new photo is actually a composite of two separate exposures taken to calibrate HiRISE, which is so powerful that it's able to resolve features as small as 3.3 feet (1 meter) across on the Martian surface from MRO's orbital perch.

"The combined view retains the correct positions and sizes of the two bodies [Earth and the moon] relative to each other," NASA officials wrote in a description of the image, which was released today (Jan. 6). [See the Top 10 Views of Earth from Space]

"The distance between Earth and the moon is about 30 times the diameter of Earth," they added. "Earth and the moon appear closer than they actually are in this image because the observation was planned for a time at which the moon was almost directly behind Earth, from Mars' point of view, to see the Earth-facing side of the moon."

The newly released image is sharp enough to reveal continent-size details on Earth; indeed, the reddish-brown feature in the middle of the planet is Australia, NASA officials said.

The $720 million MRO mission launched in August 2005 and slipped into orbit around the Red Planet in March 2006. For the past decade-plus, the probe has been studying Martian geology and climate; looking for signs of past water activity on the planet's surface; providing a vital communications link between Mars surface craft such as the Curiosity rover and their handlers here on Earth; and helping researchers evaluate potential landing sites for future robotic and human missions, among other tasks.

MRO occupies a roughly circular orbit that keeps the probe within 155 miles to 196 miles (250 to 316 km) of the Martian surface.