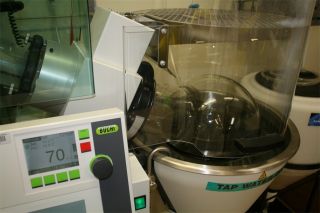 NASA's updated urine-reclaiming system is recycling even more water on the International Space Station, paving the way for long-duration space travel such as the journey to Mars.

Hauling tons of water to the space station is inefficient and costly. In 2009, NASA astronauts began recycling urine using the Urine Processor Assembly, which is able to reclaim 75 percent of water from urine.

Engineers at NASA's Johnson Space Center have since improved urine-recycling systems aboard the orbiting lab by incorporating a chemical solution called Alternate Urine Pretreatment (AUP). A few milliliters of AUP are dispensed when the toilet is flushed on the space station, allowing for a greater percentage of reclaimed water, according to a statement from NASA. [How to Pee in Space (and What to Do If the Toilet Breaks)]

"The goal is not to take large amounts of water with us to space, but to be able to take the water cycle itself to space," Dean Muirhead, an engineer with Barrios Technology, who works on water- recovery systems for the space station, said in the statement. "This project was another step in facing the water-cycle challenge and creating a closed life support system in space."

NASA astronaut Jeff Williams installed AUP on the space station on May 17. Once the urine is treated with AUP, it is distilled and filtered in the station's Water Reclamation System, before finally making it to an astronaut's drinking glass.

Officials said AUP has the potential to reach a 90 percent recovery rate, thus ensuring astronauts have the water resources necessary to survive longer, deep-space missions. What's more, AUP reduces mineral buildup, which is believed to have clogged the tubes of the urine distiller on the space station in 2009.

"Where other people see urine, I see a vital resource that is going to help astronauts survive," Muirhead said. "To accomplish long-duration spaceflight, we need to develop these technologies that allow us to live independently of Earth. We have to close the water loop."

AUP also has implications beyond its use on the space station. Clean water is a concern for many countries on Earth, and technologies such as AUP help people conserve and reuse water.