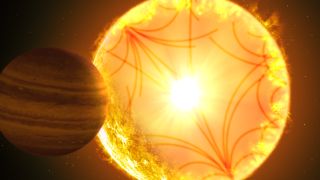 The first exoplanet candidate ever detected by NASA's late and lamented Kepler space telescope has finally been confirmed, 10 years after the iconic instrument's launch.

The candidate, known as KOI (Kepler Object of Interest) 4.01, was originally pegged as a possible Neptune-size planet orbiting a star a smidge bigger than our sun. KOI 4.01 was dismissed by some scientists as a false positive, however, after certain Kepler observations didn't accord with this scenario.

Specifically, Kepler saw a pronounced "secondary eclipse" in the system — a significant drop in total light caused when the candidate went behind the host star from the telescope's perspective. A Neptune-size world orbiting a sunlike star would not produce an observable secondary eclipse, astronomers said.

But a new look at archival Kepler observations has forced a rethink about the star, which is known as Kepler-1658 and lies about 2,600 light-years from the sun.

"Our new analysis, which uses stellar sound waves observed in the Kepler data to characterize the host star, demonstrated that the star is in fact three times larger than previously thought," Ashley Chontos, a graduate student at the University of Hawaii, said in a statement.

"This, in turn, means that the planet is three times larger, revealing that Kepler-1658b is actually a hot Jupiter-like planet," added Chontos, lead author of a new study announcing the world's confirmation, which was presented today (March 5) at the Kepler/K2 Science Conference in Glendale, California.

The study has also been accepted for publication in the Astronomical Journal. You can read a free preprint of it here.

Kepler-1658b — for that is now the world's official name — zips around its host star in an incredibly tight orbit, completing one lap every 3.8 Earth days. If you were in a plane cruising through Kepler-1648b's skies, and you somehow managed to avoid incineration, that star would appear 60 times bigger than our sun does from Earth's surface, discovery team members said.

Kepler-1658 is a future version of our own star. It's rare to find planets orbiting such "evolved" stars, discovery team members said. One possible reason is that hot Jupiters eventually spiral into their host stars. But the new observations suggest that such death plunges occur over longer time spans than previously thought, adding to the mystery.

"Kepler-1658 is a perfect example of why a better understanding of host stars of exoplanets is so important," Chontos said. "It also tells us that there are many treasures left to be found in the Kepler data."

Kepler launched into orbit around the sun on March 6, 2009. The spacecraft spotted planets by noticing the tiny brightness dips caused when these worlds crossed their stars' faces from the telescope's perspective.

Kepler did this work across two missions: its primary one, which ended in 2013, and a second, broader mission known as K2, which ended this past October when the spacecraft ran out of fuel.

Kepler's work has been incredibly productive. The spacecraft is responsible for nearly 70 percent of the roughly 3,900 exoplanet discoveries to date. And, as the new study indicates, Kepler finds will continue to roll in even though the spacecraft has shut its eyes.

And, in case you were wondering why the first Kepler exoplanet candidate was called KOI 4.01: KOIs 1.01, 2.01 and 3.01 were known prior to the telescope's launch.