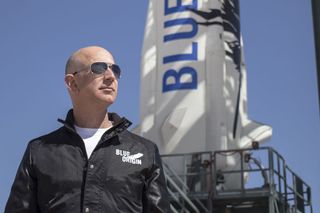 Original story: Jeff Bezos will reveal some news today (May 9) about the final frontier.

The world's richest man will speak to the media at 4 p.m. EDT (2100 GMT) in Washington, D.C., about his spaceflight company, Blue Origin. During the event, "we will give you an update on our progress and share our vision of going to space to benefit Earth," Blue Origin representatives said in a media advisory.

They didn't provide any further details. But there's reason to suspect the topic may be lunar exploration. On April 26, Blue Origin tweeted a photo of Antarctic explorer Ernest Shackleton's ship, the Endurance, along with the digits "5.9.19" — a reference to today's date.

Shackleton's name graces a crater at the moon's south pole that's thought to harbor lots of water ice on its permanently shadowed floor. Indeed, the Shackleton Crater region is often floated as a good spot for a lunar outpost.

And Blue Origin is interested in the moon. The company is developing a lunar lander called Blue Moon, which will be able to deliver about 5 tons (4.5 metric tons) of payload to the moon's surface.

Blue Origin is also working on a rocket called New Armstrong, about which very little is known. But the names the company chooses for its vehicles tend to reveal their destinations. For example, Blue Origin calls its suborbital spaceflight system New Shepard, after NASA astronaut Alan Shepard, the first American to reach suborbital space. The company's orbital rocket is New Glenn, which honors John Glenn, the first American to orbit Earth.

And New Armstrong is, obviously, named after Neil Armstrong, the first person to walk on the moon.

Space.com will be at today's event, so we'll see in a few hours if this speculation was on target or not. Stay tuned!