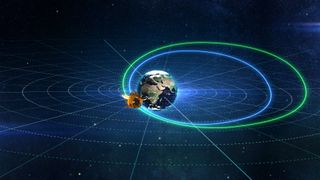 The world's first private lunar lander has hit a snag en route to the moon.

On Monday (Feb. 25), the Beresheet moon lander built by the Israeli startup SpaceIL missed a planned maneuver to steer the spacecraft along its eight-week journey to the lunar surface. The maneuver was originally scheduled for 5 p.m. EST (12 a.m. local time on Tuesday in Israel) as Beresheet orbited the Earth out of communications range with its mission control center.

"During the pre-maneuver phase the spacecraft computer reset unexpectedly, causing the maneuver to be automatically cancelled," SpaceIL representatives said in a statement. "The engineering teams of SpaceIL and IAI are examining the data and analyzing the situation. At this time, the spacecraft's systems are working well, except for the known problem in the star tracker." Star trackers are used by the spacecraft to help orient itself in space with respect to target stars.

SpaceIL's Beresheet lander launched toward the moon Thursday (Feb. 21) aboard a SpaceX Falcon 9 rocket. The spacecraft is the first privately developed lander launched to the moon and is scheduled to land on the moon's Mare Serenitatis ("Sea of Serenity") on April 11. Beresheet is taking a long route to the lunar surface, firing its engine during each loop around the Earth to gradually raise its orbit to reach the moon.

Beresheet successfully deployed its landing legs shortly after launch and executed its first in-space maneuver on Sunday (Feb. 24) despite problems with the spacecraft's star trackers. In-flight testing has revealed a "high sensitivity to blinding by the sun's rays in the star trackers," SpaceIL team members have said.

After missing its engine maneuver Monday, the lander is back in communication with its ground team as flight controllers work on next steps.

"Communication between the control center and the spacecraft remains as planned, and Beresheet continues its previous orbit until the next maneuver," SpaceIL representatives said in the statement.

The $100 million lander Beresheet (its name means "in the beginning" in Hebrew) is a joint effort between the nonprofit organization SpaceIL and the company Israel Aerospace Industries (IAI). The lander was originally developed as an entry in the $30 million Google Lunar X Prize, which challenged private teams to build and launch a robot to the moon. That contest ended in 2018 without a winner.

Beresheet stands about 5 feet tall (1.5 meters) and is designed to spend two Earth days on the moon taking photos and other measurements. The spacecraft is carrying an Israeli flag, a time capsule, a "Lunar Library" containing the full English contents of Wikipedia and more for the Arch Mission Foundation, as well as a laser retroreflector experiment for NASA.