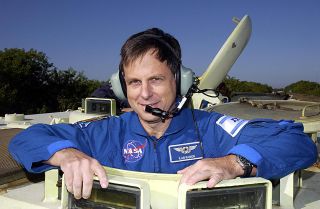 Ilan Ramon, the first Israeli astronaut, poses with the M113 armored personnel carrier during a training exercise at Kennedy Space Center in Florida in 2002. Ramon was one of the seven astronauts killed in the Columbia disaster on Feb. 1, 2003.
(Image: © NASA)

ORLANDO, Fla. — When Israel's first moon mission launches into space today (Feb. 21), a tiny memento of the country's first astronaut will fly along with the spacecraft.

Ilan Ramon, Israel's first and only astronaut, died in a tragic accident during his first trip to space. He was one of seven astronauts flying in the space shuttle Columbia when it broke apart upon returning to Earth on Feb. 1, 2003, killing everyone on board.

Sixteen years after the accident, an Israeli startup company called SpaceIL aims to tackle another momentous first by launching not just the first Israeli space mission, but also the world's first privately funded lunar lander. At a pre-launch briefing here on Wednesday (Feb. 20), SpaceIL co-founder Kfir Damari said Ramon "inspired us when we were younger," adding that he hopes SpaceIL's mission will inspire the next generation of Israeli rocket scientists.

SpaceIL's lunar lander, named Beresheet, is scheduled to launch from Cape Canaveral Air Force Station in Florida on a SpaceX Falcon 9 rocket today (Feb. 21) at 8:45 p.m. EST (0145 GMT on Feb. 22), and you can watch the launch live here on Space.com. If all goes according to plan, Beresheet will then begin its seven-week-long journey to the moon.

Along with a magnetometer and a laser retroreflector, the Beresheet lander will carry a time capsule to the moon. Inside that capsule are three tiny discs — each about the size of a nickel — containing digital copies of Israeli memorabilia, such as the nation's declaration of independence, its national anthem, Hebrew songs and artwork by Israeli children. A photo of Ramon will also be included in the capsule, The Jerusalem Post reported.

"That time capsule, I think, incorporates the dreams and hopes of all of those were involved in building the spaceship," SpaceIL co-founder Yonatan Winetraub said during the briefing. "Hopefully, people in the far future will be able to come and retrieve that time capsule" and "see what is was like on Earth in 2019."

"Unfortunately, the accident with Ilan Ramon is something I think all of us remember, but he really inspired us," Damari said. Ramon's widow, Rona, continued to fuel that inspiration after the Columbia disaster, Damari added. She founded the Ramon Foundation to promote STEM and space education for children in Israel, and she became a staunch supporter of SpaceIL's mission.

"Rona had something amazing for not just us, but all the kids who also met her and got the feeling that they are really capable," Damari said. "She really believed in everyone, and she really believed in us." When SpaceIL was founded for the Google Lunar X Prize competition in 2011, Rona told the team that they "are continuing building a path," Damari said. "Hearing that from her was something that excited us, but in a way, it [also] gave us the feeling that we must continue and we must succeed."