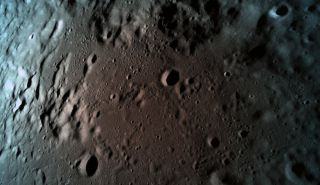 Beresheet's final photo: The Israeli moon lander captured this image on April 11, 2019, when it was just 9 miles (15 kilometers) above the lunar surface.
(Image: © SpaceIL via Twitter)

The privately funded Israeli moon lander, whose name means "in the beginning" in Hebrew, crashed during its historic touchdown bid on April 11 after suffering an engine glitch. The problem apparently began with a manually entered command, which led to a regrettable chain reaction, Beresheet's handlers have said.

And now we know what Beresheet was looking at during its last moments, thanks to a photo released yesterday (April 17) by the nonprofit organization SpaceIL, which ran the moon mission along with the company Israel Aerospace Industries (IAI).

"This is the last picture that Beresheet took, at a distance of 15 kilometers [9.3 miles] from the surface of the moon," SpaceIL representatives said yesterday via Twitter, where they posted the image.

This is the last picture that Beresheet took, at a distance of 15 kilometers from the surface of the Moon.#Beresheet #SpaceIL pic.twitter.com/fGhNkvg5QdApril 17, 2019

The photo is apparently not the last one that Beresheet beamed home, however; that distinction goes to a shot taken earlier, at a different angle, which shows the moon's limb against the blackness of space. According to Israeli diplomat Elad Ratson, the probe transmitted this latter picture when it was just 4.7 miles (7.5 km) above the lunar surface.

Beresheet launched to Earth orbit atop a SpaceX Falcon 9 rocket on Feb. 21. Over the next six weeks, the 5-foot-tall (1.5 meters) lander performed a series of engine burns to spiral outward, closer and closer to the moon.

Those maneuvers paid off on April 4, when Israel became just the seventh nation to put a spacecraft into orbit around the moon.

Got 2ⁿᵈ confirmation from @ILAerospaceIAI. This is the l̲a̲s̲t̲ image #Beresheet sent to earth before it crashed! Telemetry of moment it was taken not available yet, however, image received in mission control when Beresheet was 7.5㎞ above moon surface🔗https://t.co/Hq9cSgm9JA pic.twitter.com/9UPQ5jeSZvApril 12, 2019

Beresheet tried for even more-rarefied air on April 11. To date, only three nations — the Soviet Union, the United States and China — have pulled off a soft touchdown on the moon. And all of those successful missions were government efforts; Beresheet was trying to become the first-ever private spacecraft to accomplish the feat.

The Israeli mission was doing it all on the relative cheap as well. Beresheet's total price, including launch, was about $100 million, SpaceIL team members have said. (SpaceIL formed in 2011 to compete in the Google Lunar X Prize, a $30 million private race to the moon. The GLXP ended last year without a winner, but work on Beresheet continued.)

And Israel's moon dreams did not end on April 11. SpaceIL and IAI have already begun planning a Beresheet 2.0 mission, SpaceIL President Morris Kahn announced over the weekend.