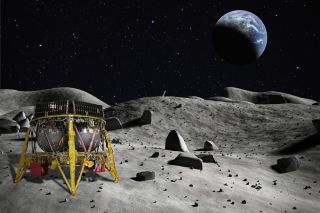 Artist's illustration of Israel's Beresheet lander on the moon. The spacecraft is scheduled to touch down on April 11, 2019.
(Image: © SpaceIL)

The stakes just got even higher for an Israeli moon lander's historic touchdown attempt next month.

If all goes according to plan on April 11, the robotic lander, known as Beresheet, will become the first privately funded craft ever to pull off a soft lunar touchdown. To date, only the governments of the Soviet Union, the United States and China have landed missions on the moon.

"We are optimistic about seeing this first domino fall, setting off a chain reaction of increasingly affordable and repeatable commercial missions to the moon and beyond," Diamandis added. (Beresheet's total mission cost, including launch, is about $100 million, team members have said.)

The nonprofit X Prize Foundation operates big-purse competitions designed to spur technological breakthroughs in a variety of fields. One such event was the Google Lunar X Prize (GLXP), a $30 million contest that challenged privately funded teams to land a robot on the moon, move the craft at least 1,650 feet (500 meters) on the lunar surface and have it beam high-resolution imagery home to Earth.

The GLXP ended last year without a winner, but several former entrants have continued to develop their robotic moon missions. One of them is SpaceIL, which was founded in 2011 to compete for the prize.

"Though the Google Lunar X Prize went unclaimed, we are thrilled to have stimulated a diversity of teams from around the world to pursue their ambitious lunar missions, and we are proud to be able to recognize SpaceIL's accomplishment with this Moonshot Award," X Prize CEO Anousheh Ansari said in the same statement.

This may not be a one-off for the X Prize Foundation. The organization will consider granting other such awards in the future, "recognizing both literal and figurative moonshots," X Prize representatives said in the same statement.

The 5-foot-tall (1.5 m) Beresheet, whose name means "in the beginning" in Hebrew, launched to Earth orbit on Feb. 21 atop a SpaceX Falcon 9 rocket.

The lander has performed several engine firings over the past five weeks to push its orbit closer to the moon. Beresheet remains on course to be captured into lunar orbit on April 4 and to touch down a week later, mission team members have said.

SpaceIL's craft will gather some data on and around the moon. But the mission's chief objectives are to advance Israel's space program and to inspire young people around the world to care more about science, technology, engineering and math.

Among the lander's payloads are an Israeli flag and a "time capsule" that includes a 30-million-page archive of human history and culture. This "lunar library" was provided by the Arch Mission Foundation, which aims to back up humanity's accumulated knowledge by storing records of it in various off-Earth locales.