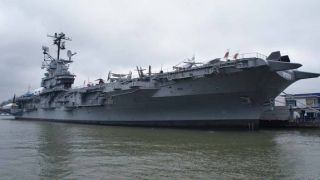 The Intrepid Sea, Air and Space Museum is based on the former Intrepid aircraft carrier docked in New York City.
(Image: © Jeremy Hsu)

NEW YORK — This Friday (Aug. 16), the Intrepid Sea, Air and Space Museum here will take visitors back in time to marvel at one of the earliest examples of innovation in transportation and how that history reflects on the upcoming journey to Mars.

During the Free Friday event, which begins at 7 p.m., aerospace and aviation experts will hold a panel discussion on new technologies and innovation in space travel. Afterward, visitors can do some stargazing with local astronomers who are bringing telescopes.

Titled "From Concorde to Mars: Designing the Future," the event will look back at the invention of the supersonic jet in the late 1970s as an example of a new technology that ushered in a new era of air travel. The supersonic plane didn't just set speed records, but it also served as an inspiration for the new space age.

The panelists leading this discussion include:

In addition to reflecting on the past, the panel will also discuss what's in store in the coming years for future missions to the moon and Mars in terms of new technology that caters to both astronauts and space tourists.

Following the panel discussion, there will be a star gazing event hosted by Jupiter Joe, a New York City local astronomer who has made it his mission to educate the public about astronomy.

The event is on a first-come first-serve basis, and is sponsored by Budweiser Discovery Reserve. (That's the beer recipe Budweiser released to mark the 50th anniversary of NASA's Apollo 11 moon landing in 1969. The Intrepid is donating $1 of every case of Discovery Reserve sold to Folds of Honor, a scholarship program for military families.)

For more details on the Intrepid museum and its Free Fridays program, visit: http://www.intrepidmuseum.org/.