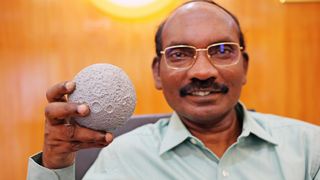 India's space program may have hit a major stumbling block on the road to the moon, but the country has already made major strides in lunar and Mars exploration.

The wildly successful Chandrayaan-1 mission finished most of its major objectives in 2009 despite losing communications with Earth after less than a year in space, about halfway through its planned run. But in that short time, the spacecraft deployed a moon impactor, producing debris that helped prove that there is indeed water on the moon. That sparked a rush for future missions to make use of that precious resource.

On Friday (Sept. 6), its successor mission, Chandrayaan-2, lost contact with its Vikram lander near the end of the always-hazardous landing process. The Indian Space Research Organisation (ISRO), which runs the Chandrayaan-2 mission, has not yet provided more details about what happened during the landing or what may have caused the anomaly.

Video: The Moment India Lost Contact with the Vikram Moon Lander
Related: India's Chandrayaan-2 Mission to the Moon in Photos

The lander and the small rover that was tucked inside it were designed to investigate the lunar environment, which could help future human missions. Vikram was meant to, among other tasks, characterize moonquakes and study the radiation environment, which are both important matters to consider when constructing dwellings for future astronauts. Despite the communications cut-out from Vikram, the Chandrayaan-2 orbiter will map and survey the moon from above for about a year.

There's much more coming, however, from the Indian Space Research Organisation (ISRO).

India Prime Minister Nahrendra Modi has told ISRO scientists that, despite the moon landing failure, "the best is yet to come" for India in space. The agency will learn from the experience and move on, he said.

"There are new frontiers to discover and new places to go," Modi said. "We will rise to the occasion and scale newer heights of success."

The space agency plans a Chandrayaan-3 moon mission in the coming years, and like NASA, ISRO is also targeting a human moon landing. India's sights are also set on interplanetary missions, including possible probes to Mars and Venus, as well as missions sending humans into space.

Back to the moon

India's next lunar mission, if approved, will be even more ambitious than Chandrayaan-2. The country is in talks with Japan to team up on sending a longer-lived rover to the moon's south pole in 2023, just one year before NASA hopes to send a human mission to the same region. India and Japan's rover would explore the frozen water that likely exists in sheltered craters, lying in shadows where the sun's rays cannot melt it.

If the collaboration goes forward as planned, The Japan News said in May, Japan will launch the mission on the country's planned H3 rocket. Onboard will be a Japanese-made rover and an Indian lander. The rover is expected to venture across a zone of about 5,380 square feet (500 square meters).

ISRO chair Kailasavadivoo Sivan recently told The Asian Age that India aims to add more international collaborations on this planned mission. "We will invite other countries, too, to participate with their payloads," he said in June of Chandrayaan-3. "We are working on the configuration of Chandrayaan-3 and will decide on the launch schedule at a later date."

Moving beyond the moon

India made it to Mars on the first try in 2014, when the Mars Orbiter Mission (MOM, or Mangalyaan 1) successfully entered Martian orbit and transmitted information. The Red Planet is a notoriously tough destination, with many missions failing due to technical problems (most recently, the European-Russian Schiaparelli mission of 2016 that attempted to land on Mars). India hopes to build on its Mars success with a new mission, naturally called Mars Orbiter Mission 2, or Mangalyaan 2.

The mission has been rescheduled a few times over the years, but its launch is now planned for no earlier than 2022. While MOM was always billed as a technology demonstrator, MOM 2 will be a more robust mission that will likely include a lander and a rover. Meanwhile, the MOM 2 orbiter will examine Martian morphology, atmosphere and mineralogy, according to The Indian Express.

India has a suite of spacecraft planned to visit other locations in the solar system as well. The Aditya-L1 mission will launch in 2020, according to ISRO, and examine the solar corona, or the outer atmosphere of the sun. This region is largely responsible for the "space weather" we encounter near Earth, including bursts of radiation that can damage  satellites, interfere with space communications or produce colorful auroras. The mission's orbit at a stable point in space, known as Lagrangian Point 1, will allow it to continuously observe the sun without experiencing eclipses.

India will send humans to space in the near future, too. ISRO plans to launch a three-person crew to space under a program called Gaganyaan. This effort will first focus on uncrewed missions to work out the technical kinks. Indian Prime Minister Narendra Modi announced the program in 2018, according to The Indian Express, and flights should begin in 2022. ISRO completed its first level of astronaut selection this week, with further rounds expected in the future to whittle down the candidate pool, according to The Times of India.

So far, only two Indians have flown in space: Rakesh Sharma (on a 1984 Soviet Soyuz mission under the Intercosmos program) and Kalpana Chawla, who flew twice in space with NASA and died in the explosion of space shuttle Columbia at the end of STS-107, her second mission.