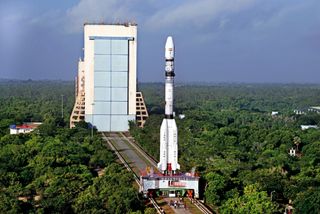 As India prepares to launch its first astronauts into space, the program will proceed under tighter funding than hoped, at least for the time being.

The human spaceflight program of the Indian Space Research Organisation (ISRO), called  Gaganyaan, received only about 30% of the funds sought by the  according to the Times of India. ISRO said it will find a way around the low budget, but details were not provided in the news report.

Gaganyaan is designed to send three crew members into space for five to seven days in a small spacecraft, roughly 10 feet by 11 feet (3 meters by 3.4 m) in diameter. Should India achieve its goal of flying its own astronauts, it will be only the fourth country to do so after the United States, the Soviet Union (now Russia) and China.

Related: India looks beyond the moon to Mars, Venus and astronaut missions

The 2020-21 budgetary estimate for Gaganyaan is 4,257 crore (about $639 million), with this figure representing about a third of ISRO's overall budget. The actual amount the agency is allocated so far for human spaceflight, however, is 1,200 crore ($180.3 million).

While the impact to Gaganyaan is unknown, ISRO has said it will cost about 10,000 crore ($1.5 billion) to launch Gaganyaan before Aug. 15, 2022, which is Independence Day in India. In general, human spaceflight programs often deal with reduced budgets in one of two ways: by delaying launches or by making cutbacks within the program to allocate the lesser funding received.

India's Parliamentary Committee on Science and Technology, Environment, Forests and Climate Change tabled a report Friday (March 9) asking for more funds bringing ISRO up to its original request, the Times added. But whether that will be implemented is unclear.

ISRO plans to conduct an uncrewed Gaganyaan test mission on its Geosynchronous Satellite Launch Vehicle rocket in December 2020 or early 2021, according to an ISRO report, targeting July 2021 for a second test flight. If all goes to plan under the current schedule, humans would fly in December 2021.

The agency pointed to significant progress in the program in recent times, including the completion of preliminary design reviews (which are typically done just before hardware is finalized). ISRO performed a pad-abort test to qualify its crew escape system in July 2018, among other milestones, the agency said.

"Various technological and infrastructure developments pertaining to crew, human-rated launch vehicle, orbital module, crew safety, reliability and [the] crew escape system are in the process of realization," ISRO said. "[The] overall concept, configuration and interfaces have been firmed up and preliminary design reviews have been completed."

Crew selection and training is also underway under a memorandum of agreement with the Indian Air Force and the Institute of Space Medicine, ISRO added. The first phase of crew selection is completed and once the astronauts are selected, they will be trained at Russian facilities. ISRO also has a contract with Glavkosmos, a Russian launch service provider under its agency Roscosmos, for crew selection, medical examinations and training.