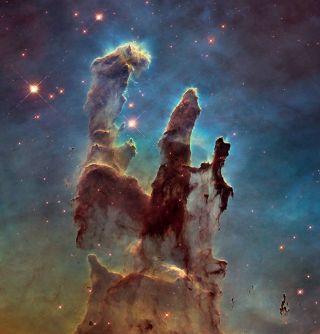 Hubble Space Telescope view of the "Pillars of Creation," towering formations of cosmic gas and dust that lie in the center of the Eagle Nebula.
(Image: © NASA/ESA/Hubble Heritage Team (STScl/AURA))

Hubble is the people's telescope.

The iconic observatory, which was deployed into Earth orbit by the space shuttle Discovery 30 years ago today (April 25), has fundamentally changed astronomers' understanding of the universe.

For example, Hubble imagery showed that the universe's expansion rate is accelerating, a surprising discovery that led to the postulation of dark energy, a mysterious repulsive force now thought to make up most of the cosmos.

Related: The best Hubble Space Telescope images of all time!

But the Hubble Space Telescope's contributions extend far beyond the scientific sphere, into the everyday lives of regular people around the world. Anyone with an internet connection has probably seen at least a few of Hubble's amazing photos, which bring the beauty and mystery of the universe down to Earth like no instrument ever had before.

Take Hubble's famous "Pillars of Creation" shot, or its glorious portrait of the Crab Nebula. Even if you don't really understand what you're looking at — and most of us don't — you're probably moved in some way by such photos. You get a better appreciation of the wonders of the universe, even if you don't engage in any overt deep thinking.

Hubble's "spectacular images have captured the imagination for decades, and will continue to inspire humanity for years to come," Thomas Zurbuchen, associate administrator for science at NASA headquarters in Washington, D.C., said in a statement.

Hubble's considerable legacy includes other facets as well. Take the technical side: Hubble was the first big space-based optical observatory, and it remains a marvel of engineering.

For example, Hubble can stay locked on a target for long stretches with no more than 0.007 arcseconds of deviation. That's equivalent to a person on top of the Empire State Building in New York City keeping a laser pointer's beam focused on a dime taped to the side of the Washington Monument, 200 miles away (320 kilometers), for 24 straight hours, NASA officials said. And Hubble manages this while zooming around Earth at 17,500 mph (28,160 km/h).

Hubble, a joint project of NASA and the European Space Agency, was also the first telescope ever designed to be serviced in space by astronauts. And servicing is a huge part of the observatory's story.

Astronauts repaired or upgraded the telescope on five separate shuttle missions, in 1993, 1997, 1999, 2002 and 2009. The first was probably the most important, for it fixed a serious problem with the highly anticipated scope: Hubble launched with a flaw in its primary mirror, which the mission team didn't notice until the observatory was already aloft.

And that adds yet another layer to the legacy.

"This is just a great story," former NASA astronaut Mike Massimino, who took part in the final two Hubble servicing missions, told Space.com. "It's a comeback story, something everyone can relate to."

As you're soaking up Hubble images on this big anniversary weekend, take a moment to appreciate the mission and the thousands of scientists and engineers — and the handful of astronauts like Massimino — whose work made those photos possible.

And don't take all that cosmic beauty for granted. Though Hubble has stitched itself into our cultural fabric, it won't last forever.