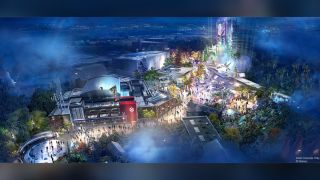 Disney's "Guardians of the Galaxy — Mission: Breakout!" ride will soon be a part of a newly announced "Avengers Campus" land.
(Image: © NASA)

Disney's "Guardians of the Galaxy — Mission: Breakout!" ride is about to get some super company.

The ride, which runs in Disney California Adventure Park at Disneyland in California, will soon be a part of a superhero-themed area that will be added to both this park and Disneyland Paris. The new "land" will be called "Avengers Campus," Bob Chapek, chairman of Disney Parks, Experiences and Products, announced yesterday (Aug. 22) at D23 Expo, according to ComicBook.

Related: The Weirdest Aliens in the Marvel Universe

"Guardians of the Galaxy — Mission: Breakout!" debuted in California in 2017, replacing the iconic "Tower of Terror" ride. The drop tower dark ride uses the same core infrastructure and ride system as the original ride, but instead of taking guests on a spooky, haunted elevator journey, it brings visitors on a cosmic adventure into the Marvel Cinematic Universe (MCU).

The new land will include this ride and also the newly announced Worldwide Engineering Brigade (WEB) headquarters, a Spider-Man attraction. "Avengers Campus" will be built into the old "A Bug's Life" land next to both the "Guardians of the Galaxy" ride and the existing "Cars" land.