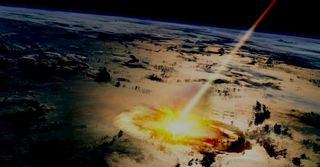 The largest planets in our solar system could have drifted away from the sun much sooner than scientists previously thought, a new study suggests. Understanding this phenomenon could help researchers to explore the origins of life on Earth.

Over 4.5 billion years ago, the planets in our solar system formed. In these early days, violent collisions between rocky objects and planets like our own created chaos in the still-developing whirlwind that became our cosmic neighborhood.

By studying meteorites and using computer modeling, a research team, led by geologist Stephen Mojzsis of the University of Colorado Boulder, is suggesting a brand-new timeline for the events that took place throughout Earth's earliest days.

These researchers estimate that a phenomenon known as "giant planet migration" happened much earlier than previously thought. This "migration" is a stage in the solar system evolution when the largest planets started to move away from the sun.

It is "a concept wherein Jupiter gravitationally affects the orbits of the outer planets Saturn, Uranus and Neptune. And, by this mutual, gravitational effect, the four giant planets each migrate and this migration leads to a small inward movement of Jupiter towards the sun and a systematic outward orbital position for Saturn, Uranus and Neptune," Mojzsis said to Space.com. This event affected the orbits of objects in both the inner and outer solar system.

"We think it [giant planet migration] had to happen in order to explain the architecture of the solar system," Mojzsis said, adding that this event explains the orbits, positions and populations of the different objects in our solar system.

Currently, the reasons behind why giant planet migration took place remain unclear, but this research team has solved one mystery of this phenomenon: when it took place. The team suggests that the migration occurred 4.48 billion years ago, much earlier than previously thought.

According to Mojzsis, these conclusions also support the idea that Earth could have been calm enough to support life as early as 4.4 billion years ago. This is much earlier than the 3.5 billion years that has previously been presumed to be the time when life on Earth emerged because that is the age of our oldest fossils.

"we find that there is nothing to prevent the origin of the biosphere and its continuous survival since at least 4.4 billion years ago," Mojzsis said.

"The only way to sterilize the Earth completely is to melt the crust all at once," Mojzsis added in a statement. "We've shown that this hasn't happened since giant planet migration commenced."

To come to these conclusions, Mojzsis and his team studied data from meteorites because asteroids predate planet formation. In addition to figuring out the timeline of the "giant planet migration," the team also discovered some interesting information about the Apollo moon rocks. Previously, scientists suspected that a lunar impact took place 3.9 billion years ago, because that was how old the rocks seemed to be. In studying the meteorite data, the team couldn't find a single example of space rock that supported the idea of a cataclysmic impact event younger than 4.5 billion years old.

Mojzsis explained that, while the rocks appeared to only be 3.9 billion years old, their radioactive ages were most likely "reset." This likely occurred due to melting caused by a major bombardment that must have taken place around the same time as the migration, Mojzsis said.

"The best way to explain these ages ... is that giant planet migration occurred at that time, which led to a sweep or a bombardment of the solar system by asteroids and comets and leftovers of planet formation," he added.

Aside from analyzing meteorite data, the team also used computer simulations to show that these giant planets did, in fact, start to move toward their current locations in the solar system about 4.48 billion years ago.

This new study was published Aug. 12 in The Astrophysical Journal.