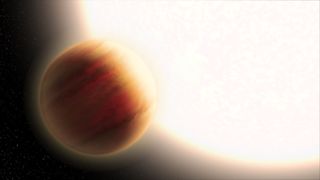 Artist's illustration of the super-hot exoplanet WASP-79b, located 780 light-years away. The planet orbits precariously close to a star that is much hotter than our sun. The planet is larger than Jupiter, and its very deep, hazy atmosphere sizzles at 3,000 degrees Fahrenheit — the temperature of molten glass.
(Image: © NASA, ESA and L. Hustak (STScI))

All that heat puffs up WASP-79b substantially, making it one of the largest alien worlds ever observed. Although WASP-79b is just 85% as massive as Jupiter, it's 1.7 times wider than our solar system's biggest planet.

Then there's the alien world's air, which researchers have now probed in considerable detail. Iron rain likely falls through WASP-79b's skies, which probably sport a very alien yellowish hue, a recent study reports. (Yellow on the dayside, that is; like other "hot Jupiters," WASP-79b is likely tidally locked to its host star, always showing it the same face.)

The scientists behind the new research studied WASP-79b's atmosphere using NASA's Hubble Space Telescope and the Magellan Consortium's Magellan II Telescope in Chile. These observations showed no signs of "Rayleigh scattering," a phenomenon in which small, high-altitude dust particles cause wavelengths of starlight to disperse differentially.

Rayleigh scattering explains why Earth's sky is blue: This color of light has a very short wavelength and therefore bounces around a lot more than other colors do. It's unclear why this phenomenon may not be occurring on WASP-79b, study team members said.

"This is a strong indication of an unknown atmospheric process that we're just not accounting for in our physical models. I've shown the WASP-79b spectrum to a number of colleagues, and their consensus is 'that's weird,'" lead author Kristin Showalter Sotzen, a graduate student in the Department of Earth and Planetary Sciences at the Johns Hopkins University Applied Physics Laboratory in Laurel, Maryland, said in a statement.

"Because this is the first time we've seen this, we're really not sure what the cause is," Sotzen said. "We need to keep an eye out for other planets like this because it could be indicative of unknown atmospheric processes that we don't currently understand. Because we only have one planet as an example, we don't know if it's an atmospheric phenomenon linked to the evolution of the planet."

The iron rain feature, while also exotic, is perhaps not quite so rare. For example, the hot Jupiter WASP-76b seems to sport this type of alien precipitation as well. ("WASP," by the way, stands for "Wide Angle Search for Planets," the international consortium that discovered these and a number of other alien worlds.)

We could learn quite a bit more about WASP-79b in the not-too-distant future. Hubble also spotted signs of water vapor in the planet's atmosphere, a discovery that put WASP-79b on the early target list for NASA's James Webb Space Telescope, agency officials said.

The $9.8 billion James Webb is scheduled to launch next year on a mission to peer at the universe's earliest stars and galaxies, study nearby exoplanets for possible signs of life (though we certainly wouldn't expect that in WASP-79b's skies), and much more.

The WASP-79b study was published in January in The Astronomical Journal.