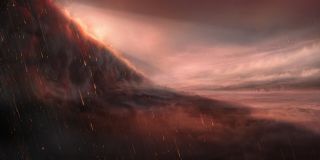 This illustration shows a nightside view of the exoplanet WASP-76b. The ultrahot giant exoplanet has a dayside where temperatures climb above 4,350 degrees Fahrenheit (2,400 degrees Celsius), high enough to vaporize metals. Strong winds carry iron vapor to the cooler nightside where it condenses into iron droplets. To the left of the image, we see the evening border of the exoplanet, where it transitions from day to night.
(Image: © ESO/M. Kornmesser)

There's a new contender for the "most exotic exoplanet" title.

The crown may have rested for a while now on the head of HD 189733 b, a cobalt-blue alien world where molten-glass rain whips sideways through the air at up to 5,400 mph (8,790 km/h). But a new study reports that iron rain likely falls through the thick, turbulent air of WASP-76 b, a bizarre "ultrahot Jupiter" that lies about 640 light-years from the sun, in the constellation Pisces.

WASP-76 b zips around its host star once every 1.8 Earth days, an orbit so tight that the gaseous planet is "tidally locked," always showing the star the same face. Temperatures on this dayside climb above 4,350 degrees Fahrenheit (2,400 degrees Celsius) — hot enough to vaporize metals — whereas the nightside is a much cooler (but still ridiculous) 2,730 F (1,500 C), researchers said.

"These are likely the most extreme climates we could ever find on a planet," said study lead author David Ehrenreich, an associate professor of astronomy at the University of Geneva in Switzerland.

"We have to stretch our understanding of what is a climate, what is a planetary atmosphere, to understand this object," Ehrenreich told Space.com.

WASP-76 b was discovered in 2013. The alien planet is about as massive as Jupiter but nearly twice as wide, likely because the massive radiation loads the exoplanet receives from its host star puff up its atmosphere considerably. (And one quick note about the object's distance: Some sources say that WASP-76 b is about 390 light-years away, but that number is inaccurate, Ehrenreich said. He and his colleagues calculated WASP-76 b's distance using data from Europe's ultraprecise star-mapping spacecraft Gaia.)

For the new study, the researchers studied WASP-76 b using the Echelle Spectrograph for Rocky Exoplanets and Stable Spectroscopic Observations (ESPRESSO), an instrument installed on the European Southern Observatory's Very Large Telescope in Chile.

ESPRESSO detected a strong signature of iron vapor at the "evening" border that separates WASP-76 b's dayside from its nightside. But no such signature was spotted at the "morning" border on the other side of the planet, where the nightside melds into day.

"Something must be happening on the nightside that makes iron disappear," Ehrenreich said.

The best explanation, he added, is that winds and WASP-76 b's rotation carry vaporized iron from the dayside to the nightside. The nightside is cool enough for the iron vapor to condense into clouds, which then dump rain into the air over there. That rain could consist of compounds such as iron sulfide or iron hydride.

But, "given the conditions, the most likely [scenario] is that iron condenses into liquid droplets of pure iron," Ehrenreich said. (This iron rain probably eventually makes its way back to the dayside again via atmospheric circulation, perpetuating the cycle, he added.)

And that rain probably isn't sprinkling down in a gentle mist, because the big temperature disparity between WASP-76 b's two halves generates winds of startling ferocity. The iron in the planet's dayside air, for example, is hurtling toward the nightside at about 11,000 mph (18,000 km/h), Ehrenreich said.

WASP-76 b's exoticism doesn't end there. The dayside atmosphere may be much more puffed up than that of the nightside because of the higher heat loads, the researchers said. So the "evening" and "morning" borders between the two hemispheres might be marked by towering clouds that fall from the light toward darkness.

"And the drizzle of this fall would not be water droplets but iron droplets," Ehrenreich said.

The craziness of WASP-76 b has more than just gee-whiz appeal. The new information about this odd exoplanet should help scientists refine and test climate and global circulation models, leading to a better understanding of exoplanetary atmospheres in general, Ehrenreich said. And WASP-76 b also serves as a compelling reminder for researchers to keep an open mind, because nature churns out a dizzying diversity of worlds.

"Exoplanets are a real treasure trove full of surprises," Ehrenreich said. "The more you look, the more you find."

He and his colleagues aim to dig up more such surprises. The new results, which were published online today (March 11) in the journal Nature, come from the very first science observations ever made with ESPRESSO, back in September 2018. The researchers are now conducting a broad survey of exoplanet atmospheres using ESPRESSO, which could reveal if WASP-76 b is an outlier or a member of a very weird class of worlds.

"What we have now is a whole new way to trace the climate of the most extreme exoplanets," Ehrenreich said in a statement.