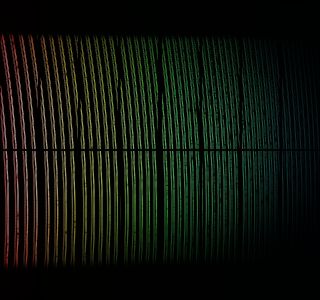 Spectral data from the "first light" of the ESPRESSO instrument on the European Southern Observatory's Very Large Telescope in Chile. The light from a star has been dispersed into its component colors. This view has been colorized to indicate how the wavelengths change across the image, but these are not exactly the colors that would be seen visually.
(Image: © ESO/ESPRESSO team)

ESPRESSO is designed to find alien planets via the "radial velocity" method — that is, by detecting the tiny wobbles in a star's movement caused by the gravitational tug of orbiting planets. The instrument is the next-generation version of the prolific HARPS spectrograph, which has discovered more than 100 exoplanets to date. [7 Ways to Discover Alien Planets]

Only NASA's famous Kepler space telescope, which looks for the tiny brightness dips caused when planets cross their star's face, has found more alien worlds than HARPS. (The gap between the two is pretty big, however: Kepler's tally currently stands at 2,515 planets across its two missions, along with 2,500 or so additional "candidates" awaiting confirmation by follow-up studies or observations.)

"ESPRESSO isn't just the evolution of our previous instruments like HARPS, but it will be transformational, with its higher resolution and higher precision," project lead scientist Francesco Pepe, of the University of Geneva in Switzerland, said in a statement.

Just how precise will ESPRESSO (whose name is short for Echelle SPectrograph for Rocky Exoplanet and Stable Spectroscopic Observations) actually be? Project team members are aiming for a velocity-measurement precision of just a few centimeters (1 inch or so) per second, compared with the 1 meter (3.3. feet) per second capability of HARPS. ESPRESSO should therefore be able to spot some of the smallest planets ever found, ESO representatives said.

Part of the improvement is due to technology advances, and part owes to ESPRESSO's placement on a much larger telescope, team members said.

HARPS sits on an 11.8-foot (3.6 m) scope at ESO's La Silla Observatory, which is also in Chile. The VLT consists of four 26.9-foot-wide (8.2 m) "unit telescopes" — and ESPRESSO will be linked to all of them, achieving the light-collecting equivalent of a single 52.5-foot-wide (16 m) scope, ESO representatives said.

"This success is the result of the work of many people over 10 years," Pepe said. "ESPRESSO will be unsurpassed for at least a decade. Now I am just impatient to find our first rocky planet!"