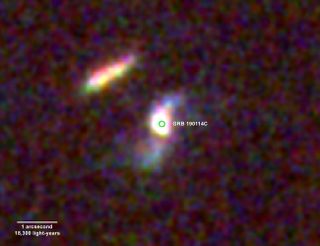 Gamma-ray bursts, the most powerful kinds of explosions known in the universe, can generate even more energetic light beams than astronomers previously realized, according to a set of new studies.

The new research suggests that scientists may have been missing about half of the energy that gamma-ray bursts produce, and offers one possible explanation for how that light reaches such high energy levels. These findings shed light on how these extraordinary explosions happen, and how they can reshape the universe, researchers said.

A gamma-ray burst gives off as much energy in milliseconds to minutes as the sun is expected to emit during its entire 10-billion-year lifetime. Previous research suggested that the deaths of giant stars or the merging of neutron stars or black holes trigger these explosions.

Such a spectacle starts with a bright flash of gamma-rays, the highest-energy form of light. Next comes an afterglow of all different types of light that can last for months or even years.

Previous research suggested that gamma-ray bursts might generate extraordinarily strong gamma-rays. But scientists have not been able to spot such energetic light — photons with energies higher than 100 billion electron volts.

For comparison, that is about "100 billion times more energetic than the optical light our eyes are sensitive to, or around 100 million times more energetic than X-ray photons, those used when we get an X-ray of our bones," Edna Ruiz Velasco, an astrophysicist at the Max Planck Institute for Nuclear Physics in Heidelberg, Germany, told Space.com. She is a co-author of one of three studies on gamma-ray bursts in the Nov. 21 issue of the journal Nature.

Now, for the first time, researchers have detected such ultra-high-energy light from gamma-ray bursts. The scientists analyzed two gamma-ray bursts detected by NASA's Fermi Gamma-ray Space Telescope and NASA's Swift Observatory. One burst, known as GRB 180720B, was seen in July 2018 about 7 billion light-years from Earth; the other, GRB 190114C, was spotted in January 2019 about 4.5 billion light-years away.

In the aftermath of each detection, other instruments turned to observe the bursts, and in both cases, they saw incredibly energetic gamma-rays. After GRB 180720B, the High Energy Stereoscopic System array of telescopes in Namibia detected gamma-rays with energies between 100 billion and 440 billion electron volts. After GRB 190114C, two telescopes in La Palma, Spain, run by the Major Atmospheric Gamma Imaging Cherenkov (MAGIC) collaboration, detected gamma-rays with energies ranging from 200 billion to 1 trillion electron volts.

After realizing how energetic that 2019 burst was, the researchers recruited more than two dozen observatories on the ground and in space to join MAGIC is observing the event. The scientists used that data to analyze the energies and wavelengths of the radiation in detail to learn more about its origins.

The researchers who made these detections believe that the observations suggest that until now, scientists may have failed to see a whopping half of the energy that gamma-ray bursts can emit. "Our measurements show that the energy released in very-high-energy gamma-rays is comparable to the amount radiated at all lower energies taken together," study co-author Konstancja Satalecka, an astrophysicist at the German Electron Synchrotron in Hamburg, said in a statement from that facility. "That is remarkable!"

Prior work has suggested that most gamma-rays in these bursts are emitted by electrons spiraling through powerful magnetic fields at nearly the speed of light. But the authors of the new research believe a different mechanism is powering the ultra-high-energy gamma-rays produced in the two recent events.

Based on their analysis of this light, the scientists suggested that the most energetic light from gamma-ray bursts likely results from photons crashing into the highest-energy electrons from the outbursts. In essence, the photons and electrons "shake hands and exchange their energies — the photons get the very high energy, and the electrons lose the energy," Razmik Mirzoyan, an astrophysicist at the Max Planck Institute for Physics in Munich, co-author of two of the new papers and a spokesperson for MAGIC, told Space.com.

The scientists expect that future research will continue to detect ultra-high-energy gamma-rays from gamma-ray bursts, now that astronomers know what to look for. Such data will help the scientists better understand the "physics of gamma-ray bursts and their interactions with their surroundings," Mirzoyan said.