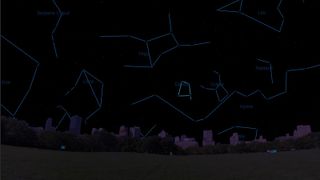 Nine out of the 88 officially recognized constellations are birds. For those who care to dabble in celestial ornithology, there are a wide variety of feathered creatures: everything from a beautiful swan, to a magnificent bald eagle. You can find the dove that was released by Noah after the great flood; it came back carrying a freshly plucked olive leaf indicating that dry land was close by. And there are also a few exotic varieties, such as a bird of paradise, a peacock, a long-necked crane and a toucan. There's even a mythical phoenix, who could supposedly live for 500 years, then die in a show of flames, only to arise again from its ashes.

And then there's a crow.

Most anyone who lives in the contiguous United States or southern Canada is likely familiar with this particular species. The genus is referred to as Corvus and in our night sky we also know the constellation of the crow as Corvus. Next to the famous Sickle of Leo, Corvus is probably the most striking star pattern in the spring southern sky for those living at mid-northern latitudes. This will be a great week to look for him in our late-spring evening sky.

Related: Full Moon Calendar: When to See the Next Full Moon

I think it should be stressed here that although they are uniformly black in color — and once thought by some to be an omen of evil — lacking the brilliantly colored plumage or distinguishing physical earmarks of some of the other birds I mentioned on our list, the crow is recognized as one of the most intelligent. The success of the American crow in adapting to civilization appears to confirm this. They are known for problem-solving as well as for possessing amazing communication skills. You might even say they're downright crafty.

For instance, some crows in Japan have been observed to take walnuts — one of their favorite treats — to a busy road intersection, then wait for a passing car to crush the nut, after which it will swoop down to devour the snack. And they almost always avoid getting run over because some of them have figured out what traffic lights mean, as shown in this BBC video. They'll wait for a red light to swoop down and place an u-cracked nut on a busy roadway. When the light turns green they fly off, but will come back at the next red light to scoop up the insides of the crushed nut!

To find our crafty avian friend in the sky, just step outside this week around 9:30 p.m. in your local time zone and look due south almost halfway up in the sky. There you will see four moderately bright stars, forming a small quadrangle. Or, put another way, imagine a triangle with its top cut off on a slant.

I've always felt that if these four stars were just a tad brighter, they would be as familiar a sight in the sky as the "W" of Cassiopeia. Still, in a reasonably dark sky they certainly stand out. Of course, those four star bear no resemblance to a crow. In fact, when a fainter fifth star in the lower right corner of the quadrangle is included, many stargazers recognize Corvus not as a crow, but rather as a mainsail for an ancient Chinese sailing ship known as a "junk."

Also, because of its resemblance to a fore-and-aft sail set on the after side of a ship's mast, known to mariners as a "spanker," some British sailors referred to Corvus as "Spica's Spanker;" the top two stars of the quadrangle, slanted upward and toward the left, are pointing almost directly at the bright bluish star Spica, in the neighboring constellation of Virgo.

But while the impression of Corvus as the sail of a ship may be far more obvious than a crow, remember that the mainsail or spanker monikers have no "official" status among the list of constellations. Such a star pattern is called an asterism. The Big Dipper and Great Square of Pegasus are other examples of asterisms.

Interestingly, there actually is a constellation known officially as the Sails (Vela), part of the now-defunct constellation of Argo (the Ship).

Related: Catch the 'Winter Football' and Other Asterisms with Mobile Astronomy Apps

He didn't give a fig

Like so many of the mythological sky characters, there's a story attached to Corvus.

The god Apollo once sent Corvus, who was his messenger, to fetch him a goblet of cool water from a fountain some distance away. The crow (or raven, as the story sometimes goes) flew at once to the fountain but, spying a luscious fig tree, he simply could not resist the temptation to wait for its fruit to ripen. So there he sat, under the shady leaves of the fig tree, until the fruit was fully ripe to eat. Eventually he returned to Apollo with the goblet filled with water, but being so late and suffering from a guilty conscience, he also carried with him in his claws a water snake that he had seized beside the fountain. Corvus then explained to Apollo that the snake had attacked him and had thus been the cause for his great delay.

Didn't I say crows were crafty?

But being wise and all-seeing, Apollo knew immediately that the story was nothing more than an alibi for the long-delayed mission. In his anger he placed all three — the Crow, the Water Snake and the Goblet — among the stars, in such an arrangement so that the snake keeps guard over the brimming goblet of water, originally meant for Apollo, so poor Corvus can never get near enough to quench his thirst. Indeed, the Goblet (known as Crater, the Cup) is to the west of Corvus, within reach, but the Water Snake, Hydra, prevents him from drinking from it.

In addition, since that fateful day, all crows that were formerly silvery white are now completely (including their beaks) black as night.

Whenever I'm giving a sky show at New York's Hayden Planetarium and tell this story, I always make sure to explain that Apollo was able to converse with Corvus because as a god he understood the language of all living creatures.

That usually leaves my audience squawking with laughter.