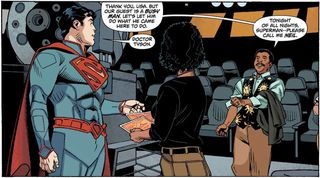 A prominent astrophysicist has pinned down a real location for Superman's fictional home planet of Krypton.

Krypton is found 27.1 light-years from Earth, in the southern constellation Corvus (The Crow), says Neil deGrasse Tyson, director of the American Museum of Natural History's Hayden Planetarium in New York City. The planet orbits the red dwarf star LHS 2520, which is cooler and smaller than our sun.

Tyson performed the celestial sleuthing at the request of DC Comics, which wanted to run a story about Superman's search for his home planet.

"As a native of Metropolis, I was delighted to help Superman, who has done so much for my city over all these years," Tyson said in a statement. "And it’s clear that if he weren’t a superhero he would have made quite an astrophysicist."

You'll have to read "Star Light, Star Bright" to find out just how Superman and Tyson pinpoint Krypton. For amateur astronomers who want to spot the real star LHS 2520 in the night sky, here are its coordinates:

Superman was born on Krytpon but was launched toward Earth as an infant by his father, Jor-El, just before the planet's destruction. After touching down in Kansas, Superman was raised as Clark Kent by a farmer and his wife.

Now Superman will apparently know exactly where he came from.

"This is a major milestone in the Superman mythos that gives our super hero a place in the universe," DC Entertainment co-publisher Dan DiDio said in a statement. "Having Neil deGrasse Tyson in the book was one thing, but by applying real-world science to this story he has forever changed Superman’s place in history. Now fans will be able to look up at the night’s sky and say, 'That’s where Superman was born.'"