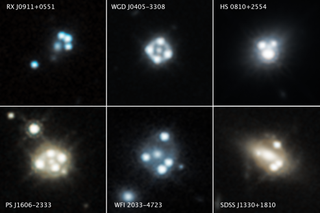 These Hubble Space Telescope images include reveals four distorted images of a background quasar and its host galaxy surrounding the central core of a foreground massive galaxy. Using the effects of gravity within this system, researchers were able to indirectly detect dark matter and find clumps of "cold dark matter" smaller than any similar clumps ever detected.
(Image: © NASA, ESA, A. Nierenberg (JPL) and T. Treu (UCLA))

It turns out that dark matter forms smaller "clumps" than scientists thought, confirming a fundamental prediction about the mysterious substance.

Dark matter is the invisible stuff that is said to make up about 27% of all of the mass in the universe. Though researchers cannot directly observe dark matter because it doesn't emit light or energy, scientists think it dominates all of outer space — and even Earth.

It may sound weird, but dark matter gets "clumpy."

According to the widely accepted "cold dark matter" theory, all galaxies form within clouds of dark matter, which is made up of slow-moving, or "cold," particles. These "cold" dark matter particles form structures, or "clumps," that can be as "small" as an airplane or as massive as hundreds of thousands of Milky Way galaxies, according to a NASA statement.

"We made a very compelling observational test for the cold dark matter model, and it passes with flying colors," Tommaso Treu, a professor in the Division of Astronomy and Astrophysics at the University of California, Los Angeles and a member of the team that made the Hubble observations, said in the NASA statement.

To indirectly observe and study dark matter, researchers use the effects of gravity in nearby stars and galaxies to detect dark matter and glean information about it. Previously, researchers have found evidence of clumps of dark matter near large and medium-size galaxies, but the clumps found in these new observations are the smallest ever detected.

As scientists continue to (indirectly) observe and study dark matter, the mysterious material becomes less … well … mysterious. This work both reveals new information about dark matter and works to confirm presumptions made about the material that makes up such an enormous percentage of our universe.

"Dark matter is colder than we knew at smaller scales," Anna Nierenberg, a researcher at NASA's Jet Propulsion Laboratory who led the Hubble survey, said in the statement. "Astronomers have carried out other observational tests of dark matter theories before, but ours provides the strongest evidence yet for the presence of small clumps of cold dark matter. By combining the latest theoretical predictions, statistical tools and new Hubble observations, we now have a much more robust result than was previously possible."

The researchers behind these observations will present their results at the 235th meeting of the American Astronomical Society in Honolulu, Hawaii.