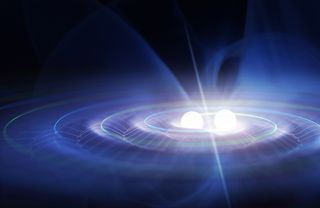 Artist's depiction of gravitational waves around a binary system. Gravity is a fundamental force in nature, but it's very much a mystery to scientists.
(Image: © shutterstock)

Of the universe's fundamental forces, only one dominates every moment of our conscious experience: gravity. It keeps us close to the ground, drags baseballs and basketballs out of the air and gives our muscles something to struggle against. Cosmically, gravity is just as consequential. From collapsing hydrogen clouds into stars to gluing galaxies together, gravity represents one of just a few players that determine the broad strokes of the universe's evolution.

In some ways, the story of gravity is also the story of physics, with some of the field's biggest names finding fame by defining the force that ruled their lives. But even after more than 400 years of study, the enigmatic force still lies at the heart of some of the discipline's greatest mysteries.

Gravity as a universal force

Today, scientists know of four forces — things that attract (or repel) one object to (or from) another. The strong force and the weak force operate only inside the centers of atoms. The electromagnetic force rules objects with excess charge (like electrons, protons, and socks shuffling over a fuzzy carpet), and gravity steers objects with mass.

The first three forces largely escaped humanity's notice until recent centuries, but people have long speculated about gravity, which acts on everything, from raindrops to cannonballs. Ancient Greek and Indian philosophers observed that objects naturally moved toward the ground, but it would take a flash of insight from Isaac Newton to elevate gravity from an inscrutable tendency of objects to a measurable and predictable phenomenon.

Newton's leap, which became public in his 1687 treatise Philosophiæ Naturalis Principia Mathematica, was to realize that every object in the universe — from a grain of sand to the largest stars — pulled on every other object. This notion unified events that appeared totally unrelated, from apples falling to Earth (although it probably didn't inspire his breakthrough, Newton did work near an apple tree) to the planets orbiting the sun. He also put numbers to the attraction: Doubling the mass of one object makes its pull twice as strong, he determined, and bringing two objects twice as close quadruples their mutual tug. Newton packaged these ideas into his universal law of gravitation.

Gravity as the geometry of space

Newton's description of gravity was accurate enough to detect the existence of Neptune in the mid-1800s, before anyone could see it, but Newton's law isn't perfect. In the 1800's, astronomers noticed that the ellipse traced by Mercury's orbit was moving more quickly around the sun than Newton's theory predicted it should, suggesting a slight mismatch between his law and the laws of nature. The puzzle was eventually resolved by Albert Einstein's theory of general relativity, published in 1915.

Before Einstein published his groundbreaking theory, physicists knew how to calculate a planet's gravitational pull, but their understanding of why gravity behaved in such a way had advanced little beyond that of the ancient philosophers. These scientists understood that all objects attract all others with an instantaneous and infinitely far-reaching force, as Newton had postulated, and many Einstein-era physicists were content to leave it at that. But while working on his theory of special relativity, Einstein had determined that nothing could travel instantly, and the pull of gravity should be no exception.

For centuries, physicists treated space as an empty framework against which events played out. It was absolute, unchanging and didn't — in any physical sense — really exist. General relativity promoted space, and time as well, from a static backdrop to a substance somewhat akin to the air in a room. Einstein held that space and time together made up the fabric of the universe, and that this "spacetime" material could stretch, compress, twist and turn — dragging everything in it along for the ride.

Einstein suggested that the shape of spacetime is what gives rise to the force we experience as gravity. A concentration of mass (or energy), such as the Earth or sun, bends space around it, like a rock bends the flow of a river. When other objects move nearby, they follow the curvature of space, as a leaf might follow an eddy around the rock (although this metaphor isn't perfect because, at least in the case of planets orbiting the sun, spacetime isn't "flowing"). We see planets orbit and apples fall because they're following paths through the distorted shape of the universe. In everyday situations, those trajectories match the force Newton's law predicts.

Einstein's field equations of general relativity, a collection of formulas that illustrate how matter and energy warp spacetime, gained acceptance when they successfully predicted the changes in Mercury's orbit, as well as the bending of starlight around the sun during a 1919 solar eclipse. [In Photos: Einstein's 1919 Solar Eclipse Experiment Tests General Relativity]

Gravity as a tool of discovery

The modern description of gravity so accurately predicts how masses interact that it has become a guide for cosmic discoveries.

American astronomers Vera Rubin and Kent Ford noticed in the 1960s that galaxies appear to rotate fast enough to spin off stars, like a dog shakes off water droplets. But because the galaxies they studied weren't whirling apart, something appeared to be helping them stick together. Rubin and Ford's thorough observations provided strong evidence supporting Swiss astronomer Fritz Zwicky's earlier theory, proposed in the 1930s, that some invisible variety of mass was speeding up galaxies in a nearby cluster. Most physicists now suspect this mysterious "dark matter" warps spacetime enough to keep galaxies and galaxy clusters intact. Others, however, wonder if gravity itself might pull harder at galaxy-wide scales, in which case both Newton's and Einstein's equations would need adjustment.

Tweaks to general relativity would have to be delicate indeed, as researchers recently started detecting one of the theory's most subtle predictions: The existence of gravitational waves, or ripples in spacetime, caused by the acceleration of masses in space. Since 2016, a research collaboration operating three detectors in the United States and Europe has measured multiple gravitational waves passing through Earth. More detectors are on the way, launching a new era of astronomy in which researchers study distant black holes and neutron stars — not by the light they emit, but by how they rumble the fabric of space when they collide.

Yet general relativity's string of experimental successes gloss over what many physicists see as a fatal theoretical failure: It describes a classical spacetime, but the universe ultimately appears to be quantum, or made up of particles (or "quanta") such as quarks and electrons.

The classical notion of space (and gravity) as one smooth fabric clashes with the quantum picture of the universe as a collection of sharp little pieces. How to extend the reigning Standard Model of particle physics, which spans all known particles as well as the other three fundamental forces (electromagnetism, the weak force, and the strong force), to cover space and gravity at the particle level remains one of the deepest mysteries in modern physics.