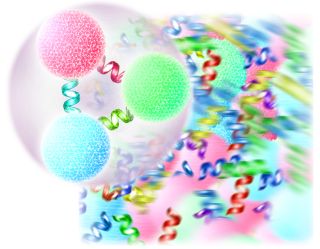 A proton (foreground) is made up of three quarks, each with a unique property called color. They're held tight by the strong nuclear force.
(Image: © Lawrence Berkeley National Laboratory)

All four known forces of nature have their own unique place. Gravity, electromagnetism, weak nuclear, strong nuclear: Each one governing some little domain of our lives. While our everyday experiences are dominated by the gravity of the Earth and the electromagnetism of light and fridge magnets, the twin nuclear forces play key roles, too — just at very, very tiny scales.

How tiny? Imagine yourself ballooning up to become the size of the solar system. Your hands swim through the Oort Cloud itself, the planets nestle above your belly button. You are so large that electrical signals take weeks or even months to make their journey through your nervous system, making even the simplest gestures achingly slow.

That's the difference between your current size (roughly a couple meters) and 10^15 meters.

Related: What Is the Strong Force?

Now, run it in reverse. Imagine a scale so small that your current body feels as vast as the solar system. A scale where your movements eke along at the slowest of paces. This incredibly tiny scale is the femtometer: 10^-15 meters. It's the scale of the atomic nucleus.

From way up here, it's tempting to think of the proton as a single particle. A hard shell of positive charge and mass, able to bounce and knock around as easily as a billiard ball. But in reality, a proton is made of three smaller particles. These particles have the delightfully quirky name of quarks. There are a total of six kinds of quarks in nature, but for our close examination of the proton we only need to care about two of them, named the up and down quarks.

Like I said, a proton is a triplet of quarks: two up quarks and one down quark. These quarks bind together as a team, and that bound team is what we call a proton.

Except, that shouldn't make any sense.

The two up quarks have the exact same electric charge (because they're the exact same kind of particle), so they should absolutely hate each other. How do they stay so tightly glued?

And what's more, we know from quantum mechanics that two quarks can't share the exact same state — you can't have two of the same kind bound together like that. Those two up quarks shouldn't be allowed to coexist together like that. And yet they not only tolerate each other, but seem to really enjoy the company!

In the 1950s and '60s, physicists began to realize that the proton is not fundamental — it can be broken down into smaller parts. So they did a bunch of experiments and developed a bunch of theories to crack that particular nut. And they immediately ran into a) the existence of quarks and b) the puzzling conundrums above.

Something was holding those three quarks together. Something really, really strong. A new force of nature.

The then-hypothesized strong force solved the problems of coexisting quarks by simple brute force. Oh, you don't like to be together because you can't share the same state? Well, too bad, the strong force is going to make you do it anyway, and it's going to provide a way around that problem.

And every force has a connection point. A hook. A way of telling that force how much you are affected by it. For the electromagnetic force it's the electric charge. For gravity it's the mass. For the strong nuclear force, physicists had to come up with a new hook. A way for a quark to connect to another quark via that force. And physicists chose the word color.

Thus if you or a particle you know has this new property called color, then you get to feel the strong nuclear force. Your color can be one of red, green, or blue (confusingly there is also anti-red, anti-green and anti-blue, because of course life isn't that simple). To build a particle like a proton, all the colors of the quarks have to add up to white. Thus one quark gets assigned to be red, the other assigned to be green, and the last assigned to be blue. The particular assignment of color doesn't actually matter (and, in fact, the individual quarks constantly change color), what matters is that they all add up to white and that the strong force can do its work.

This new property of color is what allows the quarks to share a state inside a proton. With color, no two quarks are exactly the same — they now have different colors.

Imagine taking two little pliers and grabbing two of the quarks in the proton. You work out, so you are able to overcome the strength of the strong nuclear force holding them together.

But here's something weird about the strong force: It doesn't diminish with distance. Other forces, like gravity and electromagnetism, do. But the strong force stays just as strong as it always is, no matter how far apart those quarks are.

So as you tug on those quarks, you have to keep adding more and more energy to maintain the separation. You eventually add so much energy that, energy being equivalent to mass and all that, new particles appear in the vacuum between the quarks. New particles like … other quarks.

These new quarks almost immediately find their newly separated friends and bind together, tossing all your hard work and sweat away in a single flash of energy before the distance between them is even noticeable. By the time you think you've separated the quarks, they've already found new ones to bind to. This effect is known as quark confinement: The strong force is actually so dang strong that it prevents us from ever seeing a quark in isolation.

It's a shame we'll never get to see what its color is.

Learn more by listening to the episode "What makes the strong force so strong?" on the Ask A Spaceman podcast, available on iTunes and on the Web at http://www.askaspaceman.com. Thanks to Kayja N. and Ter B. for the questions that led to this piece! Ask your own question on Twitter using #AskASpaceman or by following Paul @PaulMattSutter and facebook.com/PaulMattSutter.